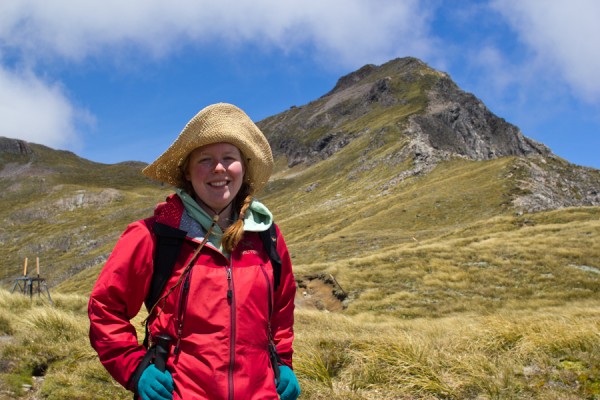 Many abject apologies for the total lack of blogging recently.  We had some server difficulties which made it impossible to access pictures for about a month. Things are back online now, and there should be more frequent updates!

After leaving Abel Tasman National Park on Christmas Eve, we drove south through the interior and finally along the west coast…..and drove, and drove, and drove.  The south island is far less populated that the north island, and this is evidenced by the total lack of traffic, the overabundance of sheep and cattle, and the one lane bridges, (more on these next time).  Our destination was Arthur’s Pass National Park. The weather was volatile, as usual, but we did get some partial clearing and a rainbow or two along the way. 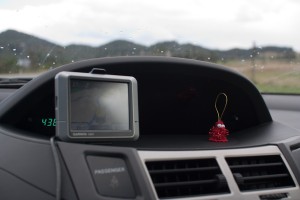 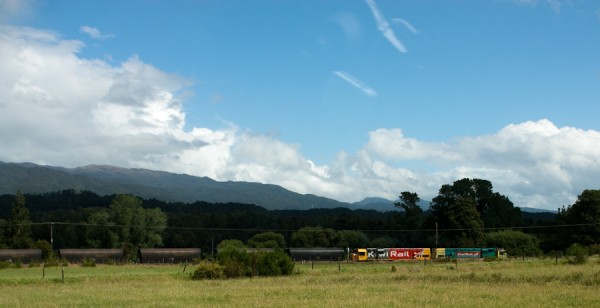 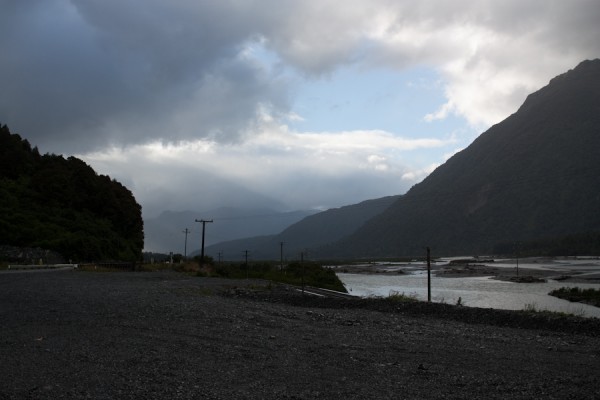 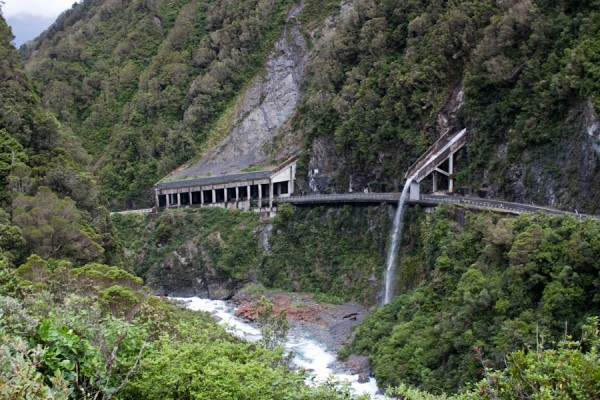 After turning away from the coast, and heading back towards the center of the island, we were aiming straight for the Southern Alps.  This is the mountain range that runs the length of the south island.  It is large, remote, wild, virtually uninhabited and has very few passes over it.  As you may have guessed, Arthur’s Pass is one of them.  Eventually, we started our climb up through the mountains.  It was late in the day, and a mist and fog was laced through the valleys and snaked around the peaks.  We started looking for Gollum to poke his head around the next jagged rock outcropping looking for the One Ring.

We finally arrived at the tiny village of Arthur’s Pass, and tried to seek out a Christmas Eve service.  As it turns out, the tiny chapel in town only has services on Sunday mornings, and Christmas is no exception.  So no Christmas carols for us.  This was  a pretty big blow for me.  I had never been away from family before on Christmas, and never missed the Christmas Eve church service.  To me, it’s an integral part of Christmas, and I wasn’t going to get it this year.  There were tears and I threw a pretty big pity party for myself.  Luckily, I have an amazing husband, who not only dealt with the pity party, but had a BACKUP PLAN.  The backup plan, aside from heroically offering to drive another hour back to civilization after we had already set up camp and night had fallen, was to bust out dinner and the laptop.  While I moped, Tom chopped vegetables for pasta sauce.  Now remember, we were camping, so making nice food is a bit harder.  We had a very yummy dinner of pasta with fresh veggies, which helped lighten the mood.  To top it all off, Tom had loaded a bunch of Christmas movies onto the laptop that we brought with us, and we watched Rudolph the Red Nosed Reindeer and Charlie Brown’s Christmas. As silly as it sounds, eating yummy food and watching fun movies really did make Christmas Eve special. 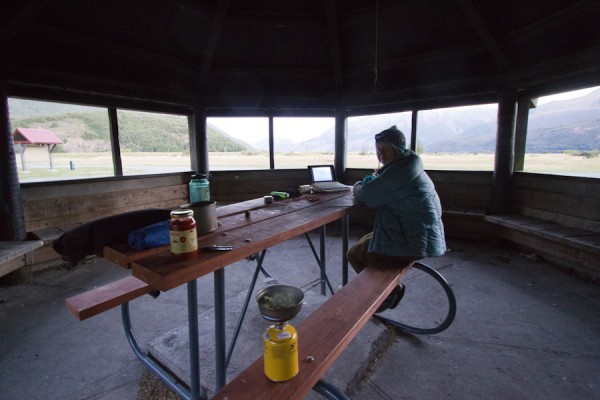 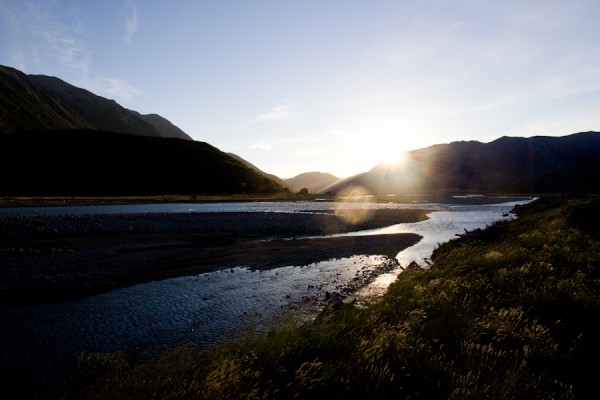 The next morning, we had our own little mini-Christmas with presents that we had painstakingly brought all the way form home to exchange on Christmas morning.  Tom got me a two person travel game that we played throughout the rest of the trip called Mr. Jack Pocket.  I got him a new pair of underwear!  Hey, I knew it would be about half way through the trip when we exchanged gifts, and I wasn’t exactly sure what the laundry situation would be.  It was nice to have a bit of Christmas, even if it was sunny and very far from home.  (The photos of Christmas Eve and Day aren’t fantastic…but they do tell the story!) 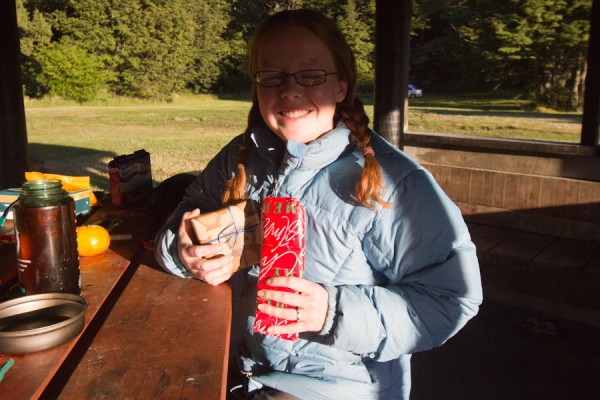 After our oh so delicious breakfast of Cadbury “breakfast bars”, we headed out to the ranger station. For long, strenuous hikes, the rangers like for you to register your intentions, so that if you don’t come back, they know where to go looking for you.  The ranger station was open for only 20 minutes due to the fact that it was Christmas Day, so we needed to be prompt.  When researching the hikes for our trip, the one consistently mentioned in the Arthur’s Pass areas was the Avalanche Peak Trail linked with the Scott’s Track to make a loop.  Now, the Avalanche Peak Trail was considered “very challenging” and the Scott’s Track, “moderately challenging”.  Since it was December and we were feeling a bit out of shape, we decided to go out and back on the Scott’s Track.  This was our first experience with the fact that Kiwis TOTALLY understate the difficulty of their trails. 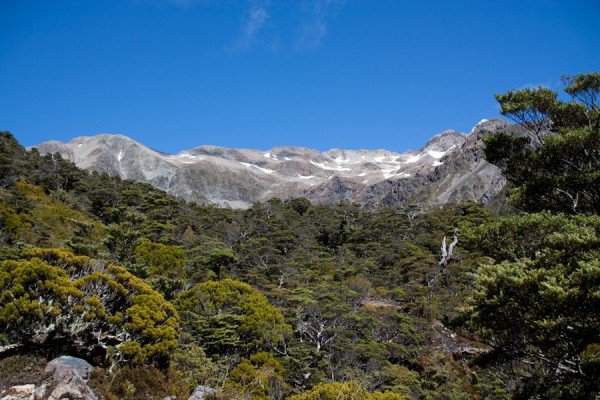 We knew we were in trouble when the “trail” seemed to be more or less a stream bed, complete with rocks, roots and boulders.  In fact, the word “trail” is a bit of an overstatement of the situation actually.  However, it started in lush beautiful forest full of weird looking plants and more fern trees, so at least we had nice scenery to look at as we hoofed it up and up and up.  Eventually we broke the tree line and were rewarded with jaw dropping views of the valley below and the mountains above.  The higher we climbed, the better the views.  We were right in the middle of the island, and had quite dramatic vistas where the mountains dropped off to the east and west, and where they climbed further to the sky towards the south.  Magnificent. 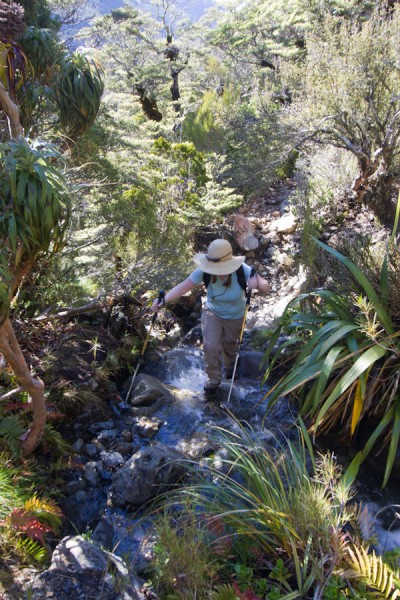 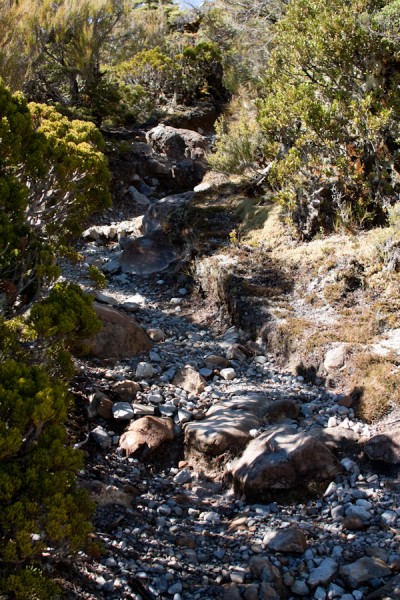 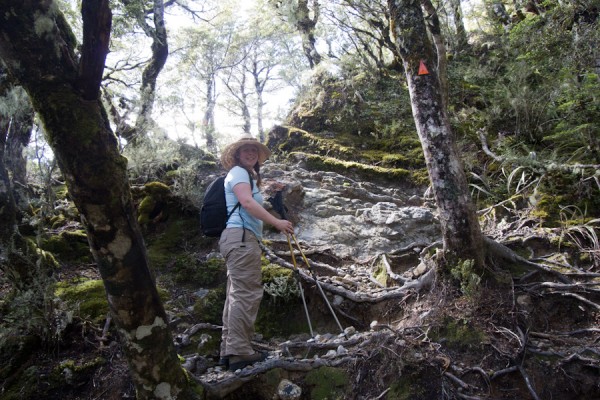 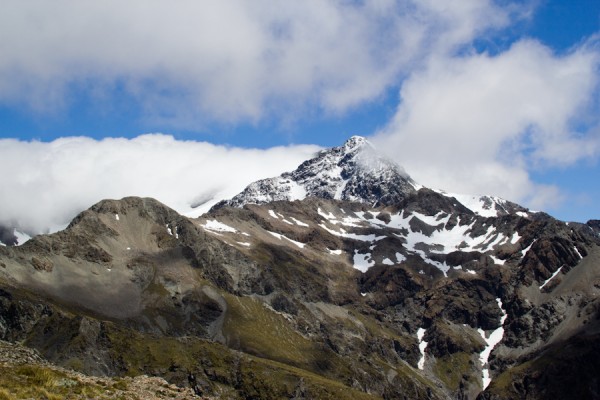 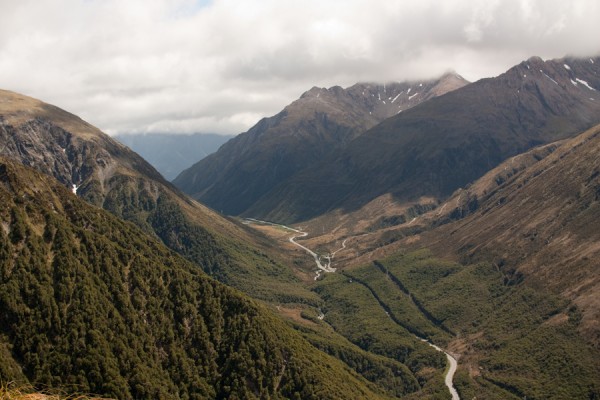 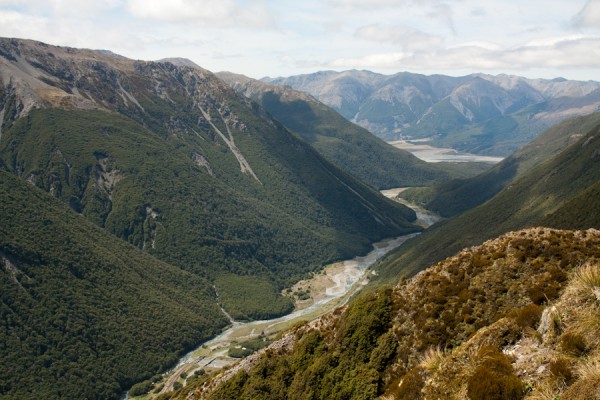 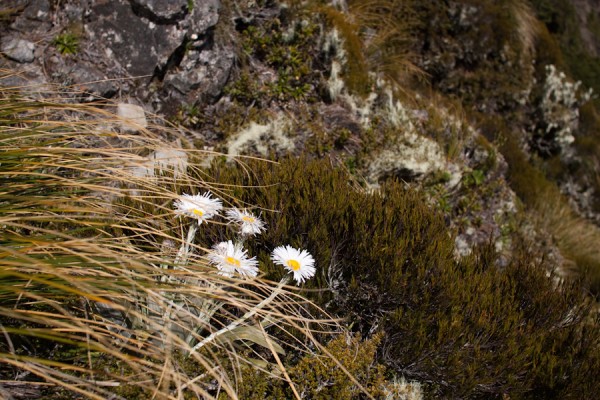 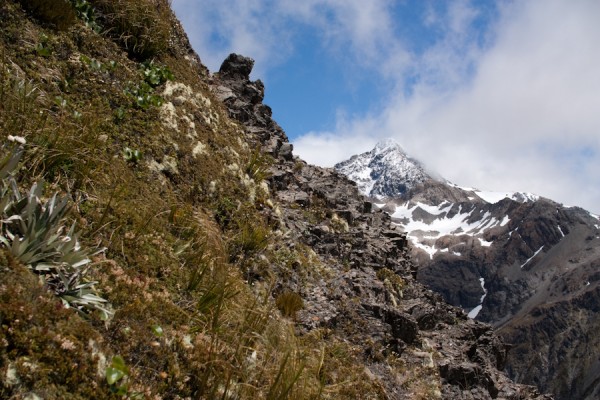 The higher we got, however, the more exposed the trail was, and the wind was really whipping.  There was some rain forecast to come into the pass in the afternoon, and we could literally watch the storm starting to come in from the west coast.  Eventually it got a bit too windy for this red head, and I called for a lunch stop to reassess our situation.  After dining on sandwiches and chicken flavoured chips, (yes, that’s a real thing, and yes, they are delicious), we decided that the summit was just not in the cards for the day.  It was still over a mile away with probably another 1,000 ft of elevation gain, and we could see the rain coming.  I think Tom would have been up for it if I was willing, but he wasn’t too fussed about turning around.  The views had been amazing, and we were ready to call it a day. 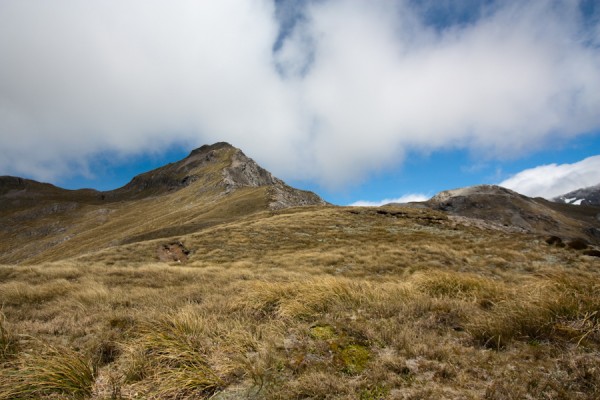 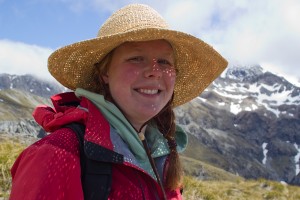 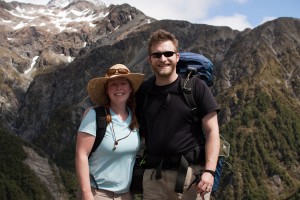 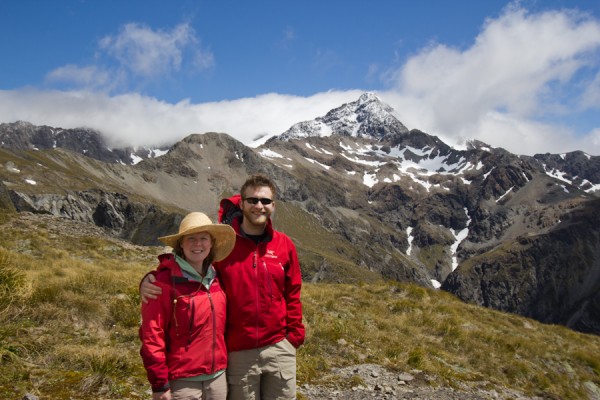 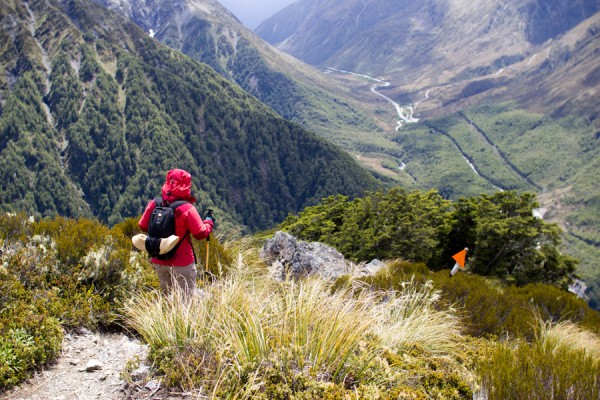 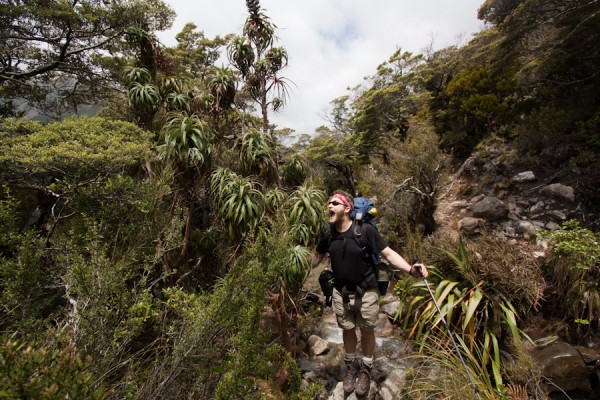 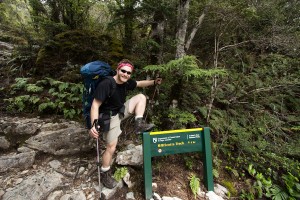 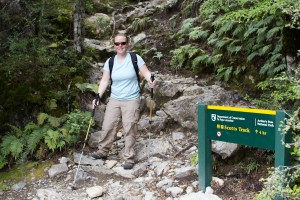 After our decent, the rain began, and we took refuge in the town of Arthur’s Pass on the front porch of a convenience store, which conveniently, (hehe), had wifi that we could use to call our parents via Google Voice.  Crazy technology these days!  While we rested our aching feet, we were visited by several curious kea.  These are the indigenous alpine parrot that lives in the Southern Alps of New Zealand.  They are incredibly intelligent, very curious and often quite mischievous.  They have been known to rip open tents, carry off hiking boots and unzip backpacks to get at hiker’s hidden treats.  They’re fun and quite beautiful.  It was fun to watch them fly and climb around. 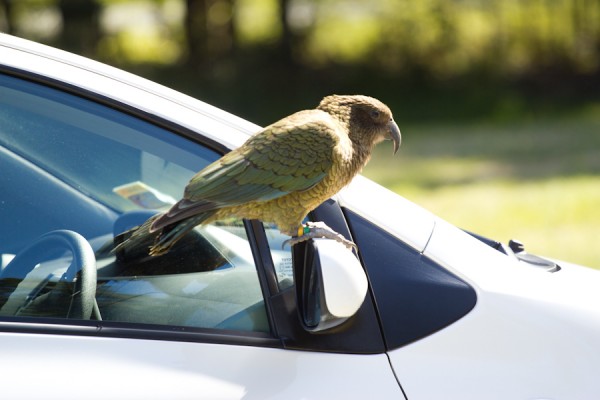 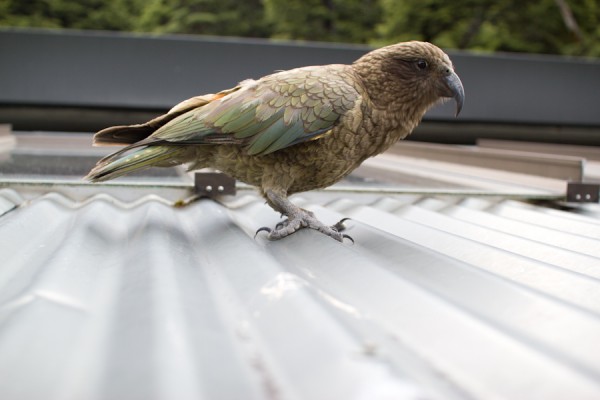 We spent one last evening in Arthur’s Pass before heading back to the west coast.   Up next, Franz Joseph Glacier, Queenstown, the elusive kiwi bird and even more rain!  Stay tuned!