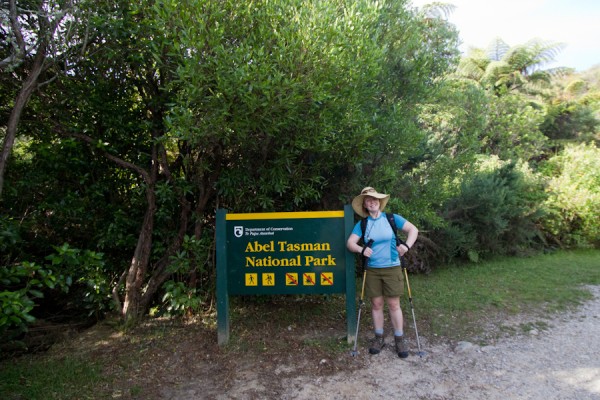 We arrived in the South Island! We were in search of sun, and we found it!  There was much rejoicing!  After our change of plans to come to the South Island a day early, we also decided to go visit one of the national parks we had written off due to lack of time, Abel Tasman National Park.  It was also pretty much the sunniest place in the whole country that day as well, so we lucked out.  We left Picton in the morning, took a reasonably quick detour through Nelson and headed up the coast to Abel Tasman.  This national park is predominantly coastal, and the highlight of the park is the Coast Track, which is considered one of New Zealand’s “great walks”.  These “great walks” are several multi-day backpacks through some of the country’s most scenic natural areas.  We were able to complete the first day of the walk, camp on the beach overnight, and take a water taxi back to our starting point the next day.

We started the hike in the afternoon, with the sun finally shining down on our very grateful heads.  My back was acting up in a major way, so Tom, being the gentleman/pack animal that he is, took most of the load for our overnight, leaving me only burdened with my camera bag and gigantic sun hat.  Honestly, the thing has it’s own zipcode.  The trail starts out crossing a tidal flat, then starts to gradually climb up onto the headlands overlooking the Marlborough Sounds.  The trail undulates up and down over the headlands, and turns inland and back towards the sea with the contours created by the many streams that cross the track.  Since the trail is so well traveled, it is in incredible shape, with very stout bridges and well maintained drainage systems for the *ahem* occasional rain shower.  We also saw some of the flora that is unique to New Zealand, such as the fern tree.  This plant is exactly what it claims to be.  It is a fern that grew up to be a tree.  They have enormous fronds and a woody trunk, but at the top, they’re all fern.  Weird. 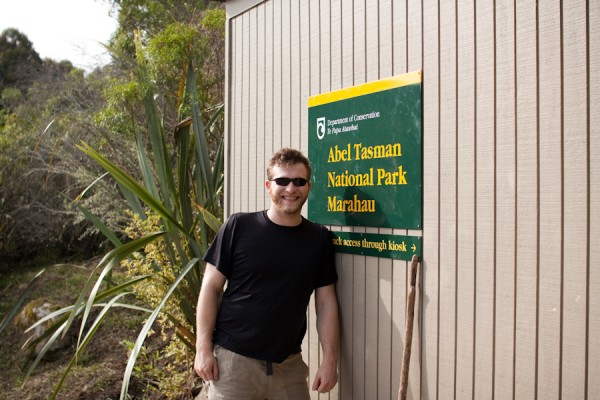 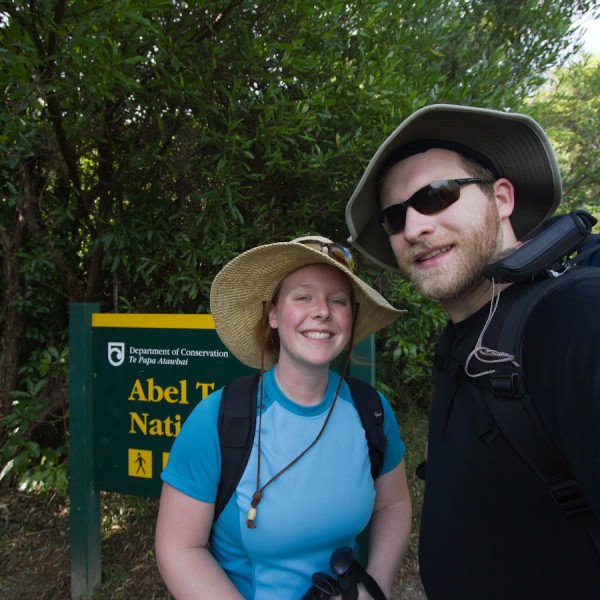 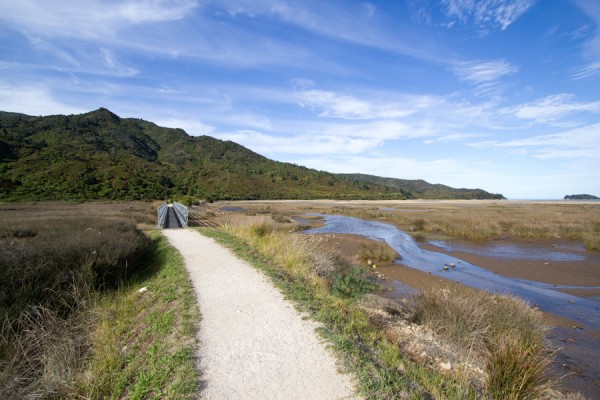 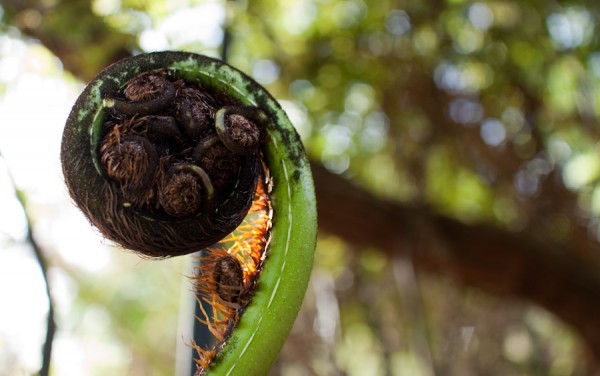 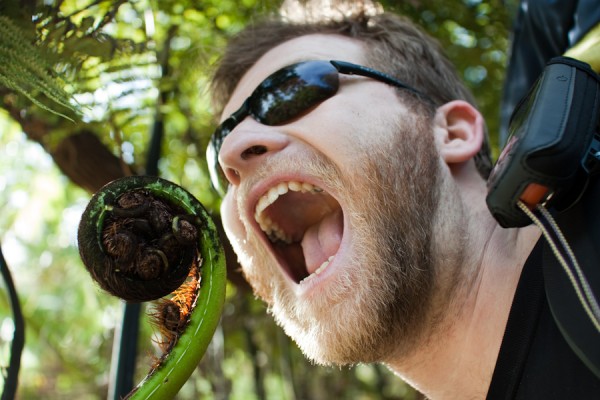 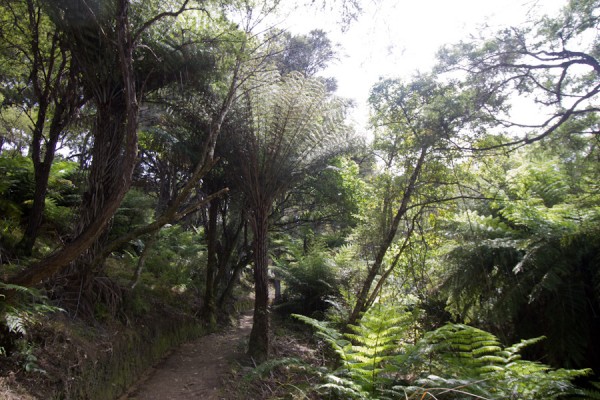 Since trail descriptions in New Zealand rarely include elevation gain, we were unsure how long it would take us to hike the 12km to the first hut along the walk.  We decided instead to camp at Akerston Bay, a small campsite about 8km along the trail.  In hindsight, there was no real elevation to speak of, and we completed our hike for the day quickly, but it simply gave us more time to enjoy our beautiful beachfront campsite.  The site has space for 3 tents, but luckily there were only one other French couple and ourselves there for the night.  Yay private beach!  Tom swam in the ocean, because when given a body of water, he will swim in it, no matter how cold, or lacking in fresh water to bathe the situation may be.  I puttered around oohing and ahhhing over our breathtaking surroundings. 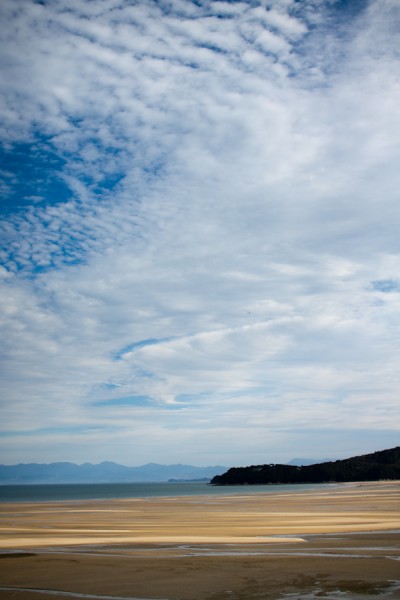 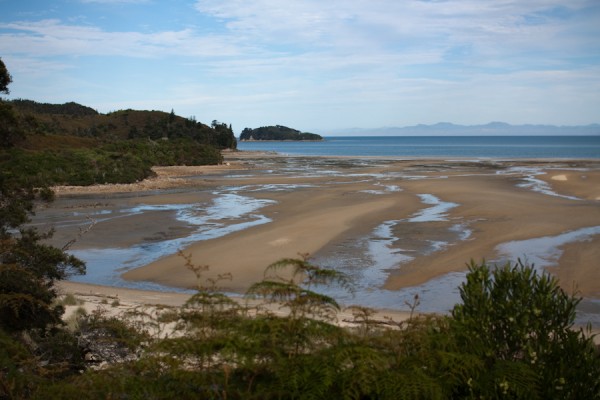 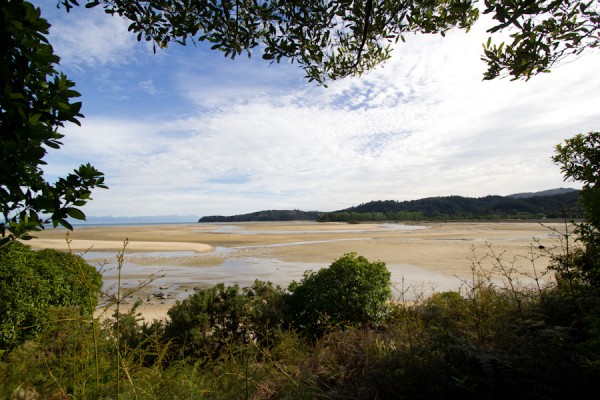 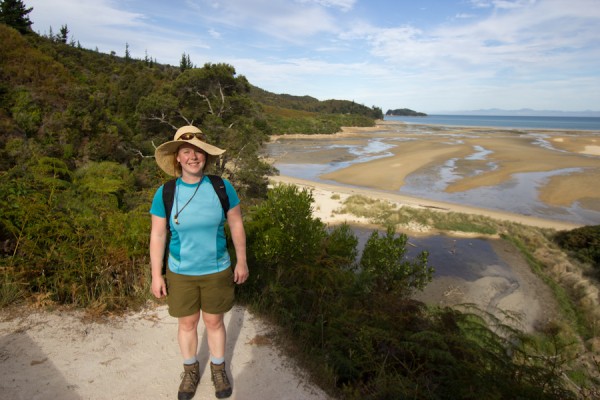 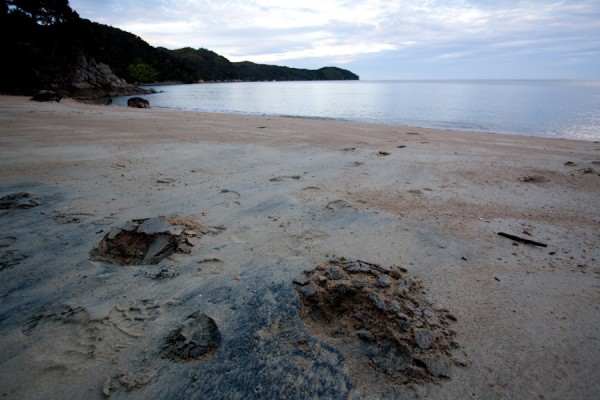 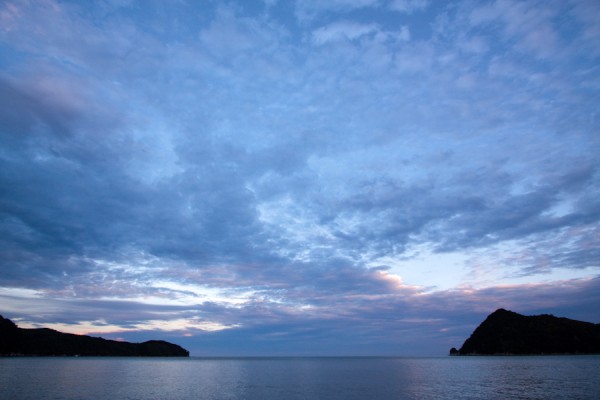 Eventually we retreated back up into the wooded area beside the beach to make dinner at the picnic table and let the other couple have some “beach time”.  They came wandering up a few minutes later though to ask if we were able to help them with their stove.  They had unknowingly purchased the wrong type of fuel canister for their type of stove, so we let them use ours to make their dinner once we were done.  After dinner, it had become completely dark, and we decided to go down to the beach and look at the stars.  Since we were so far from any major towns or cities, there was very little light pollution, and the stars where quite brilliant.  It was our first really clear night since arriving in New Zealand, so it was amazing to see how different the constellations were in the Southern Hemisphere.  We did see the Southern Cross, and sang the song as well.

The highlight of the evening walk, however, was while we were sitting in the darkness with headlamps off, looking at the stars, we heard a wet flapping sound coming from the ocean.  It continued and got closer.  I turned my headlamp on, just in time to see a little blue penguin scuttle up the little stream that runs from the woods to the ocean, and right into the woods themselves!  We visited a blue penguin colony later on the trip, and learned that this little guy probably had his nest in the rocks right inside the woods, and that he was returning to his nest for the night.  I really like penguins, and have never seen one in the wild, so it was a truly unique experience.  Tom tried to get a few photos, but the little penguin was a bit skittish, so they look more like Bigfoot photos than anything else.  Hopefully we didn’t traumatize the poor thing. 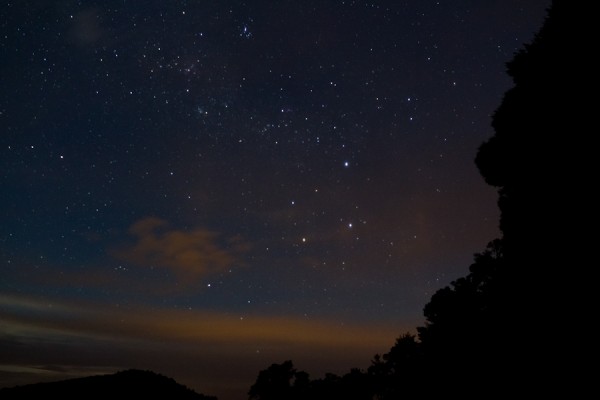 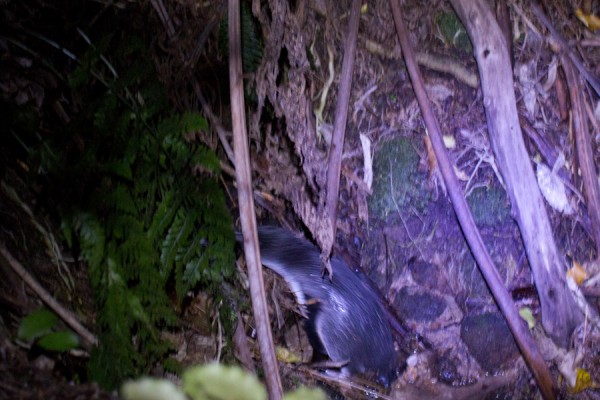 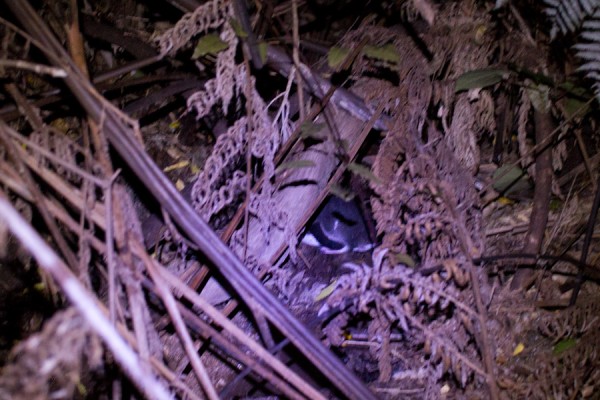 The next morning, we hiked the last 2km to Anchorage, where the first hut of the walk is located.  We had arranged for our water taxi to pick us up at 1:30, but we arrived much earlier than anticipated.  We did a short hike from the hut up to an overlook and down to another small beach and back, but the weather was changing, and we were ready to get off the beach.  We hid up at the hut while showers rolled in and out, and Tom would rush down the beach every time a water taxi would come, to see if we could catch a ride back early.  Eventually, we were able to hitch a ride back with one of the earlier taxis.  The water was choppy, so I was focused on trying not to be sick, while Tom popped around taking photos.  We had to make a few stops on the way back, and he was eventually told to sit down by the driver.  There was a moment of hilarity when we arrived back at the boat ramp and the driver drove the boat up the ramp onto the boat trailer attached to a tractor.  The same driver then proceeded to hop out and drive the tractor pulling the boat down the street with us still in it.  Now, I’ve been in some strange transportation situations, but never have I ridden in a boat being pulled down the street by a tractor.  This was a new one for me. 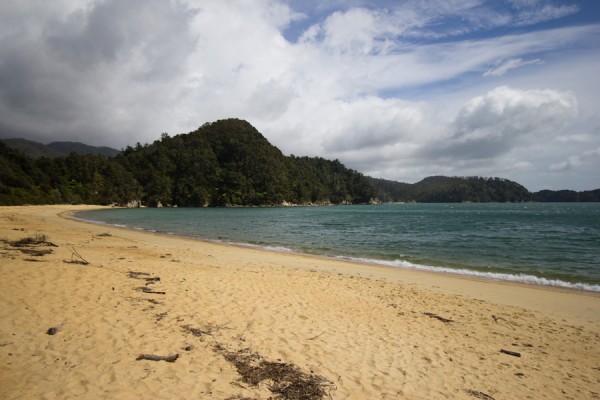 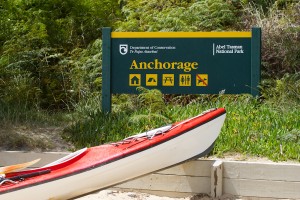 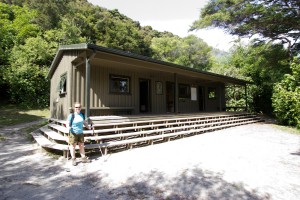 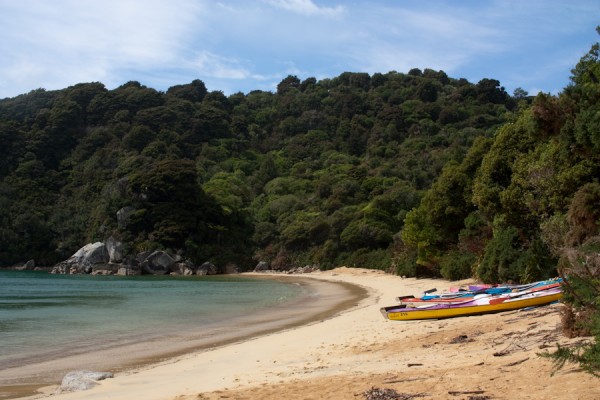 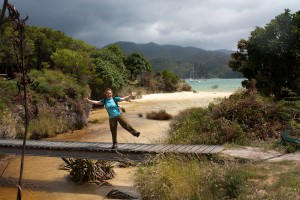 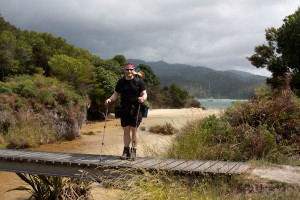 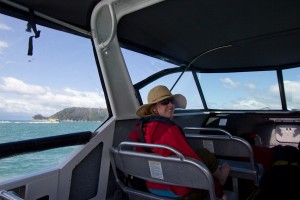 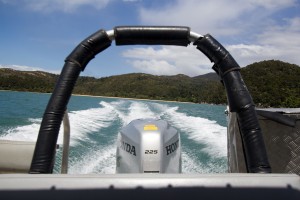 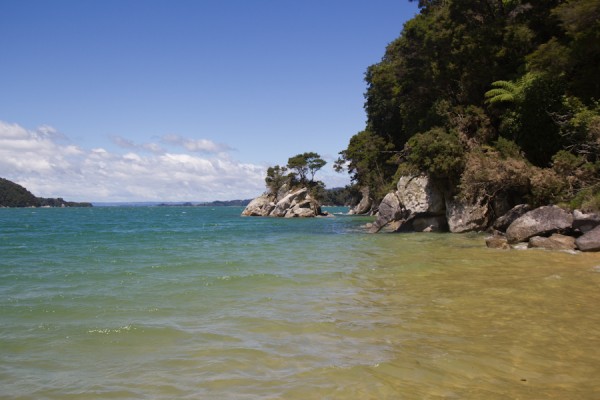 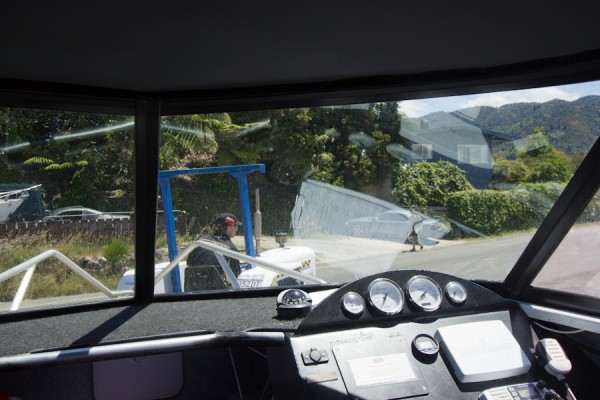 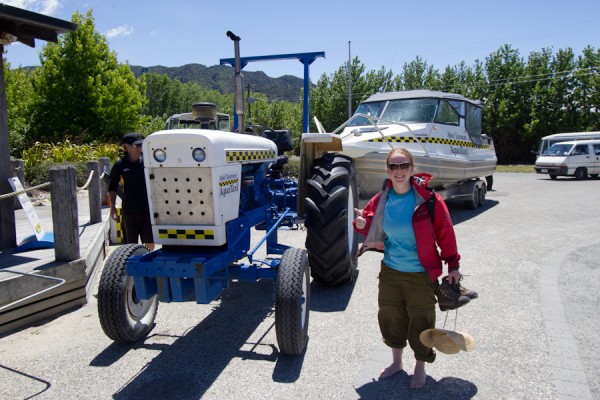 We finally made it back to the water taxi outfitter and Tom fetched our rental car from the parking lot over by the trail head.  We weren’t too sunburnt, but the vitamin D certainly did us good.  We were now ready for the long drive down to Arthur’s Pass National Park for Christmas Eve!