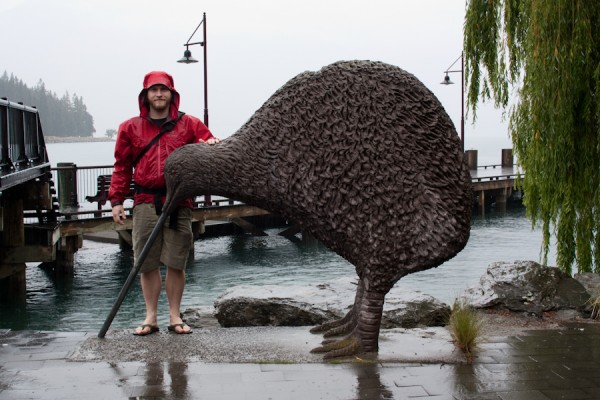 So this is the post where I try not to whine too much. However, the truth of the matter, was the days spend traveling down the west coast of the south island and Queenstown were the most challenging of the trip, in so many ways.  There were highlights, and moments of comedy throughout our suffering, which I will try to focus on, so that you don’t stop reading and click through to the next blog on your reader.

We left Arthur’s Pass and headed back to the west coast headed towards Westland National Park, and the infamous Franz Joseph and Fox Glaciers.  These are also the names of the towns where the glaciers live, it’s all very confusing.  Along the way, we stopped in one of the coastal towns which is known for its greenstone (this is the Kiwi word for jade) jewelry production.  I got a very lovely piece.  Tom also stopped at a hardware store, because he had become slightly obsessed with the two tone New Zealand mailboxes and wanted to see if we could bring one home. 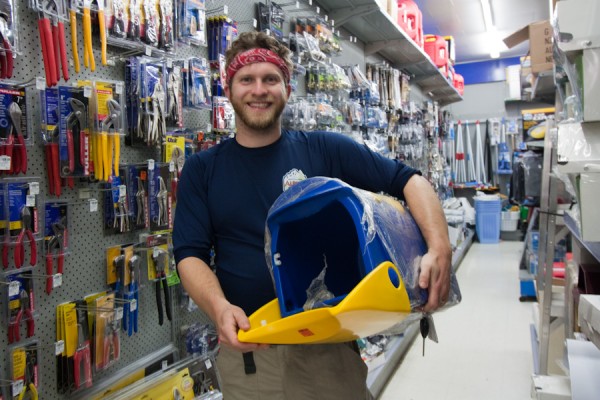 The weather was not great, but it wasn’t horrible either, and we wound our way down the coast in a steady drizzle.  This part of the country is very remote, and has very little population.  As I mentioned before, the Kiwis take advantage of this lack and save money by building bridges with only one lane.  It is a bit unnerving to approach a bridge and know that there is no way out if someone starts barreling down form the opposite direction straight at you.  This risk is somewhat moderated by the right of way signs that pop up about a km before the bridge, telling you whether you have right of way or not.  After that, it’s just a game of chicken, where you hope you read the sign right.  Yikes. 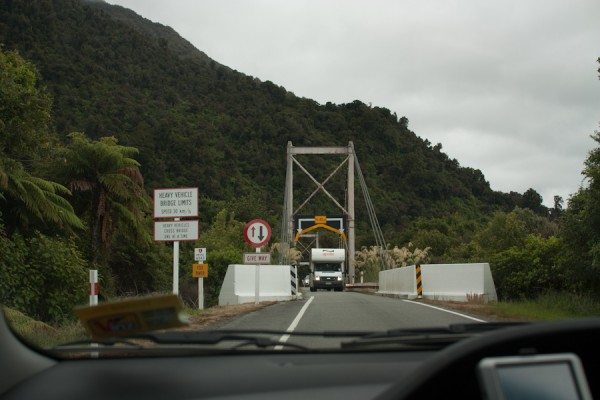 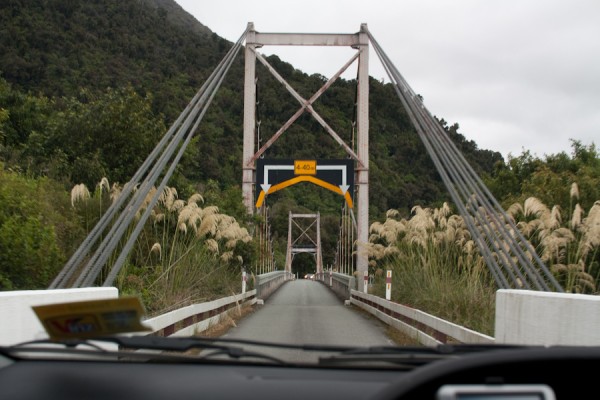 We eventually made it to the town of Franz Joseph Glacier, where we were planning to stay for the night, as it was about 3 hours from Arthur’s Pass.  We stopped by the Department of Conservation (DOC) office, which is essentially a very nice ranger station, to check on the trail conditions for the day, as we had planned several walks near and around both the Franz Joseph and the Fox Glaciers.  We were a bit surprised, however, when the rangers said that there had been record rainfall amounts over the past few days, and even more rain was expected.  All of the trails near Fox Glacier had been closed due to flooding, and they were only recommending a few trails near Franz Joseph due to flood risk.  We figured that we’d come to see glaciers up close and personal, and we would do what we could to make that happen, so we headed off for our “approved” trail.  With our rain gear. 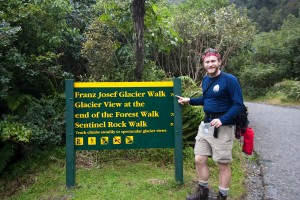 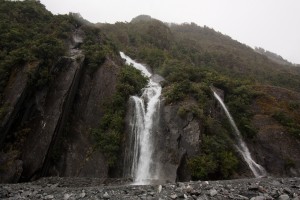 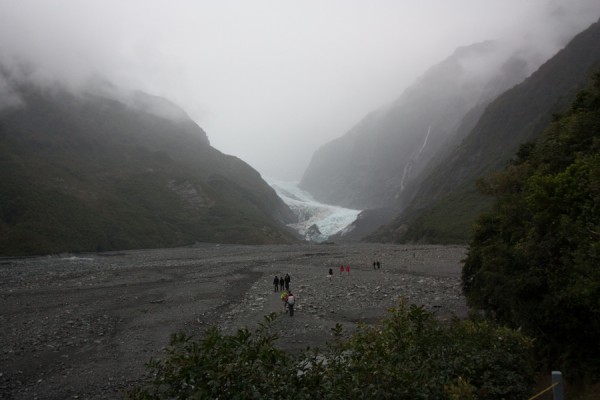 The “hike” to the glacier was pretty much a flat walk along the receding glacier’s moraine, which pretty much looks like a lunar landscape, as the glacier has spent eons grinding the bedrock down to pebbles and sand.  We were able to get very close to the glacier its self, which was very cool.  The glacial ice is a bright, vibrant shade of blue, and there is a constant grinding and popping noise as the slow moving river of ice makes its presence known. 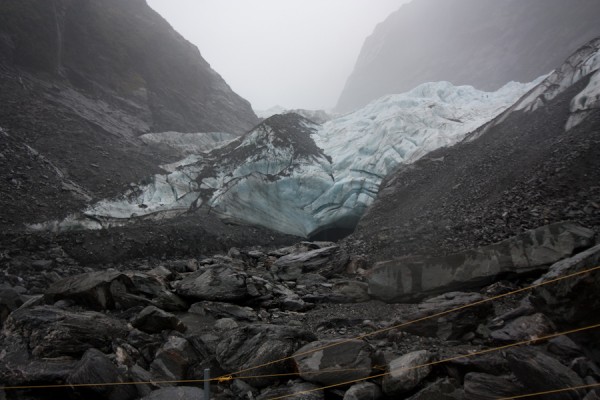 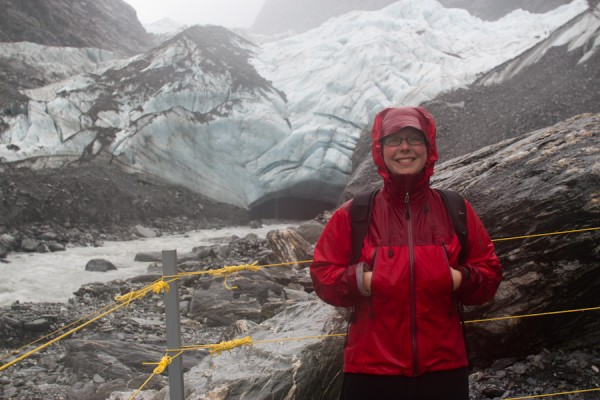 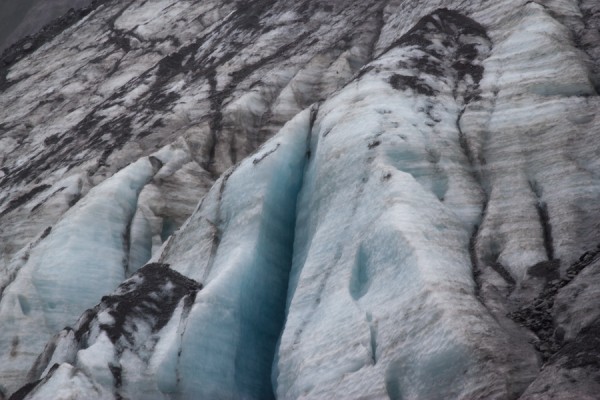 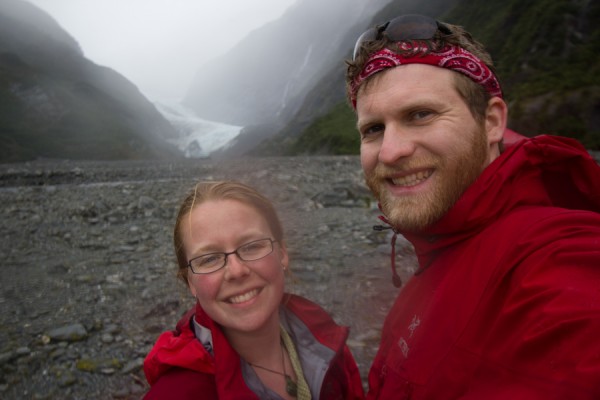 Soon we were soaked to the skin, and headed back to our car.  Since we were unable to do most of the hikes we had planned for the next day and a half, we needed to reassess our route.  We could have stayed in Franz Joseph that night, but there really seemed no point, as the town was tiny and there were no hikes to do.  So it was back into the car, and planned to drive as far as we could towards Queenstown that evening.

We made it to Wanaka, which is about another 3ish hours south of Franz Joseph.  The road went through some very wild country, with even more one lane bridges.  We were driving through the lower portions of the Southern Alps, and there were few other cars on the road.  We kept stopping to take in the dramatic scenery, which still managed to be breathtaking despite the rain.  One memorable stop was this lake, which was one of the windiest stops we made on the trip, and where a very unfortunate tour group had stopped to set up camp for the night. 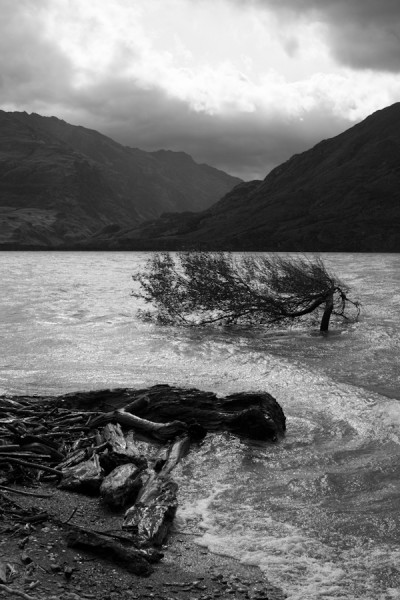 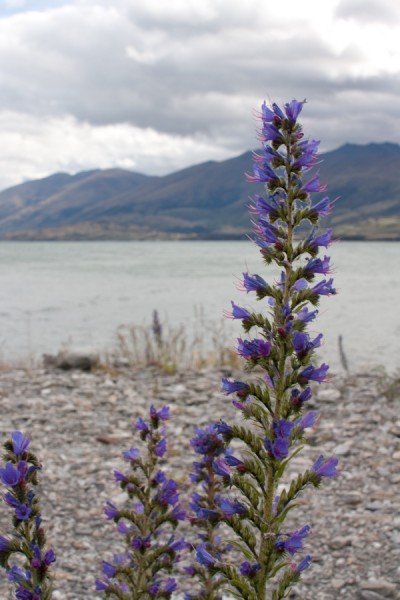 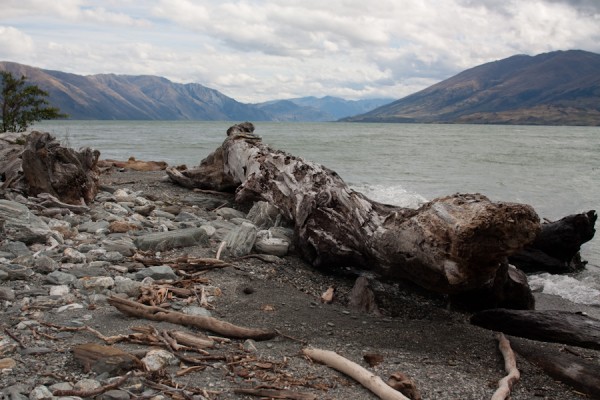 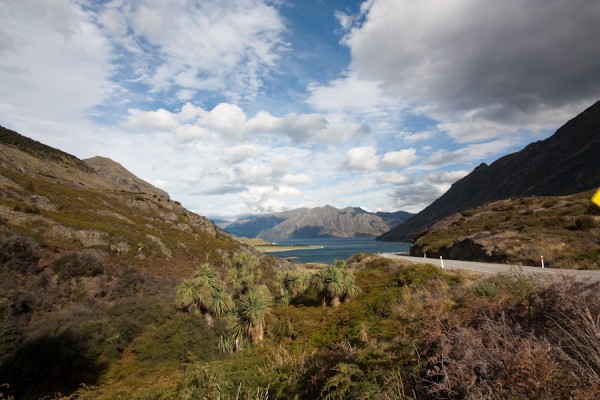 Eventually we made it Wanaka, where we spent about 45 minutes looking for a cheap hotel ,before Tom gave in, and we decided to treat ourselves to a night at a nice bed and breakfast.  We felt like we had earned it, and man, was this place swanky.  But, really, after several days in the rain, just having a roof over our head and a warm shower seemed like high times. 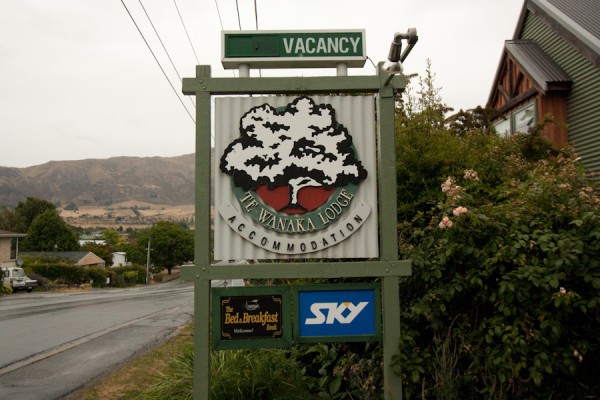 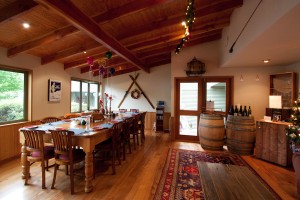 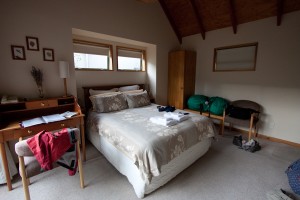 The next morning we drove further south through the passes to Queenstown.  This city is famed for it’s stunning alpine vistas and adrenaline packed adventures such as sky diving, bungee jumping, river surfing and canyoning.  We checked into the Southern Laughter Backpackers, (which is the Kiwi word for hostel), and requested a private double room.  They said they had only one available, and it was “in the back garden”.  Now, I think that when referencing your converted shipping container “room” which is sitting in the back parking lot, it’s a bit of a stretch to talk about it being “in the back garden”, but hey, who am I to judge.  Our room was just that, a converted shipping container in the parking lot, which happened to be rapidly filling with an alarmingly large puddle due to the aforementioned rain.  We decided to go for it though, because how many opportunities do one have to sleep in a converted shipping container? 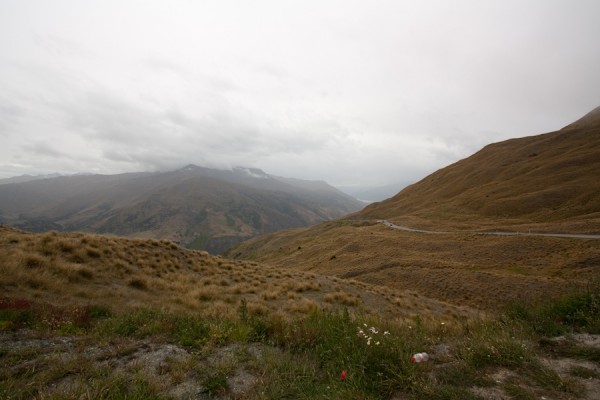 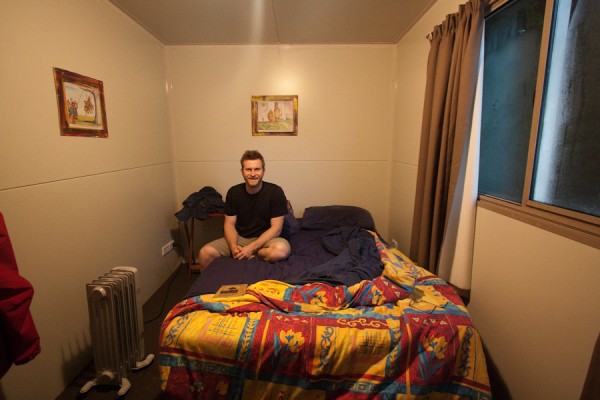 We spent the afternoon and evening bumming around Queenstown in the rain, getting soggy, sampling some of the local brews and having a tasty dinner at a well reviewed Indian restaurant.  As a side note, do not go to New Zealand for the food.  In our experience they cook only two things well:  fish and chips and Indian food.  It’s pretty much all we lived on during our time there.  Now you know.  We had originally planned on doing a backpacking trip that night, but due to the epic amounts of rain falling from the sky, most of the trails were either under water or closed due to high flood risk.  In fact, a few folks that we talked to that were staying at our backpackers had actually just been evacuated off the famed Milford Track the day before due to the fact that the entire time they had been hiking on the trail, the water had been up to their waists or chests, and they had to be helicoptered away from their hut to avoid the rising waters. 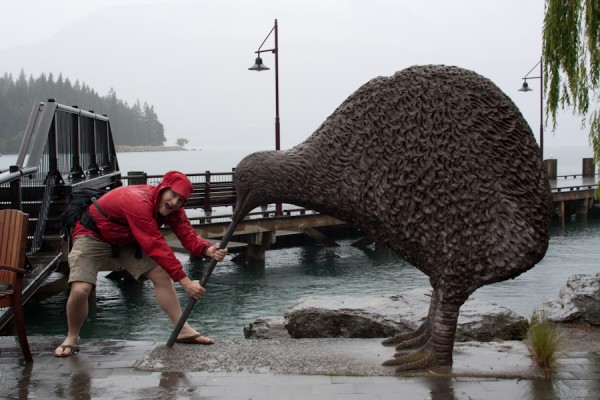 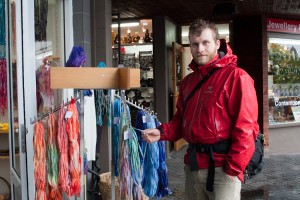 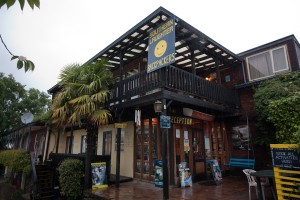 At this point, we were sick of our plans being changed, we were sick of the rain, and just wanted to do something fun.  So we wandered into one of the outfitters that offered canyoning tours.  In America, we call this canyoneering, where you jump, swim, slip and slide your way down a river, and try to have fun and not drown yourself in the process.  We shelled out a rather large sum to book our fun for the following day, then splashed our way back to our container for the night.  The following morning, we woke up and were glad to see that the large puddle in the back “garden” had not yet overtaken our front porch, and eagerly got ourselves ready to go canyoning.  However, when we arrived at the outfitter, we were told that, of course, there had been so much rain overnight that the rivers were now at flood stage, and all trips had been canceled for the day.  I probably don’t have to mention that this was pretty much the low point of the trip.  We’ll just move on.

Because my husband is amazing, (and at this point pretty desperate), he yet again salvaged a BACK UP PLAN.  He read in our guidebook that there was a very interesting bird park in Queenstown that was mostly under cover, and he thought it might be worth checking out.  Now, I’m not that into birds, but New Zealand has some of the most unique birds in the world, so bird parks actually have some appeal.  They also had two breeding pairs of kiwis, which while being the national bird are actually quite rare, so we were anxious to see them.  Kiwis are nocturnal, so the kiwi houses are red, but you can make out the akward and somewhat silly shapes of these interesting birds in the photos.  Tom took some video where you can see them better, and hopefully I’ll be able to post some soon! 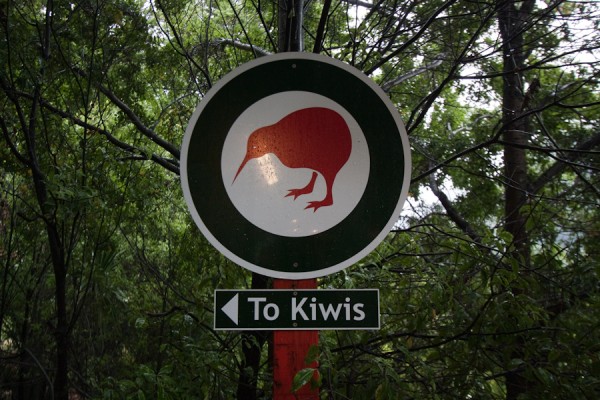 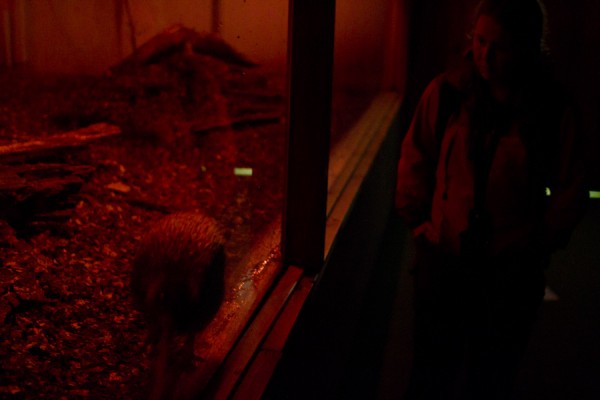 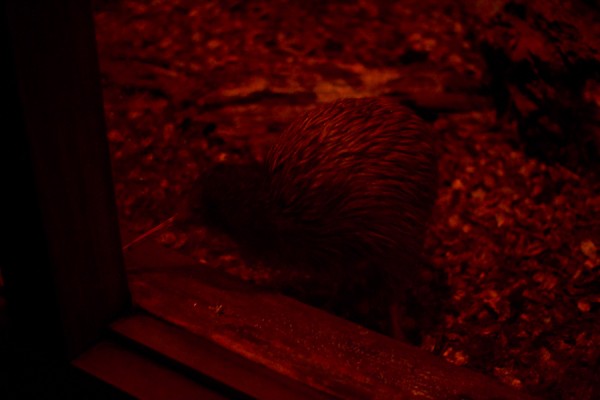 All in all, the west coast and Queenstown were far from the highlight of the trip, but they were a learning experience for us.  We have defiantly learned not to pin our hopes on one activity in a place, and to always, ALWAYS have a backup plan.  Preferably one that involves flightless birds, they’re always good for a laugh.

Up next, the odd spherical boulders, the blue penguin colony and Mt Cook National Park.