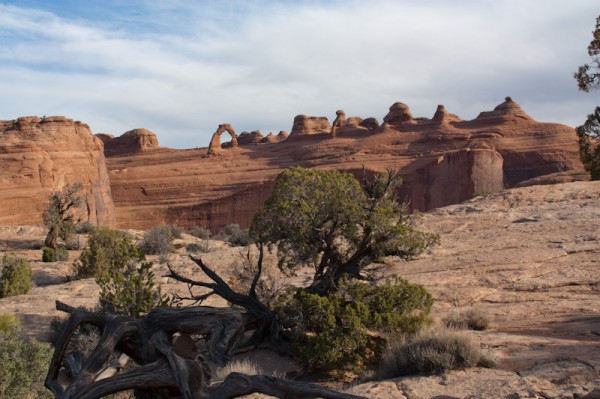 Last week was my Spring Break.  WHEE!!  Spring Break is such a magical time.  This year, Tom and I decided to head wherever was cheapest, and fun…est.  We also wanted to try to include some National Parks, as we are still on our quest to visit all of the NPs in the country.  We ended up deciding on Utah, and specifically visiting Arches, Canyonlands and Capitol Reef National Parks.  We started off in Arches, which is just outside Moab, Utah.  We arrived late on Sunday night and camped at a DNR campground just outside the park, next to the Colorado River.  The forecast called for a cold, windy night, but it was windy beyond belief.  Like, I thought the tent might collapse kind of windy.  Sweet.

So after not too much sleep, we headed into the park the next morning. Many areas of middle to southern Utah are made up of these gorgeous red-rock mesas, gorges, and arches, and this park is no different.  Soaring walls of stark reddish orange towered over us as we snaked through the park to arrive at Balanced Rock. Basically, the “rock” is there because it is made up of a more durable (less susceptible to erosion) type of rock, while the rock underneath is much softer, making it erode more quickly, giving it the “balancing” look.  Eventually the base will wear away completely, and the “Balanced Rock” will collapse to the ground.  The light was a bit tricky early in the day, so our photos here aren’t super fabulous, but the feature was really interesting. 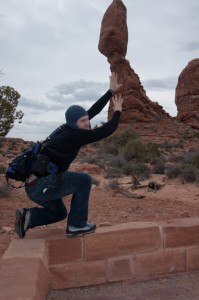 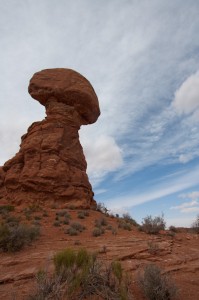 Next we traveled deeper into the park to an area called Devil’s Garden.  By this point, it was afternoon, and we still hadn’t seen any of the park’s namesakes!  I wanted to see some arches!  We found them here though. The first one we visited was Landscape Arch, a delicate, impressive span that looks almost impossibly long.  We were unable to venture under it, as I believe the park service is worried about parts breaking off and landing on tourists! 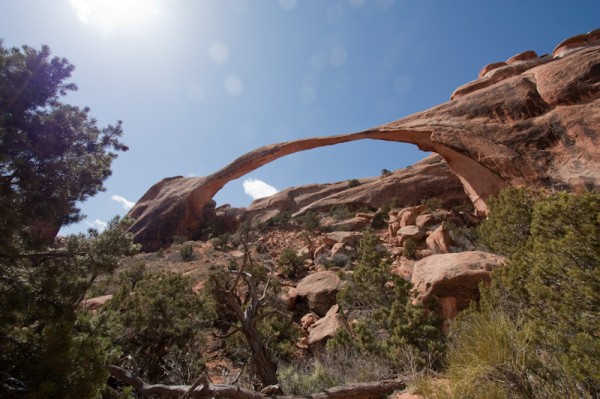 After that we ventured up the “primitive trail” to Partition Arch, which is visible in some of our photos of Landscape Arch.  Up here the wind started kicking up, as in gusting probably 30ish mph.  With sand.  Right.  Partition Arch was amazing, as it overlooked the entire valley; we could see for probably a hundred miles. Amazing. 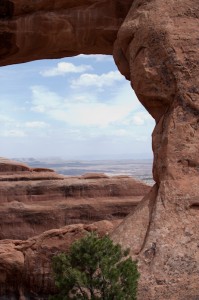 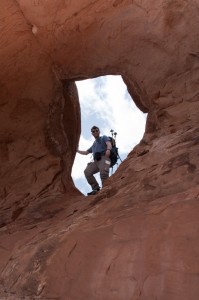 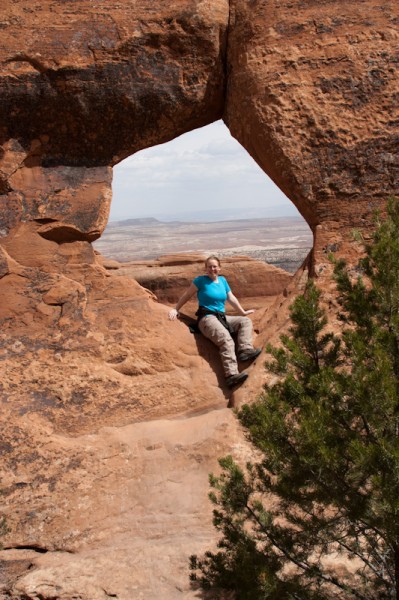 Leaving this area of Devil’s Garden, the wind started blowing in earnest.  We kept having to stop and turn our backs to the gusts and hide our eyes.  The sand stung our skin and was burning our faces.  This was when I realized I am not really cut out for desert travel.  Clearly something I needed to learn the hard way.  We did stop by Pine Tree Arch and Tunnel Arch on the way out, but spent very little time there due to sandblasting. 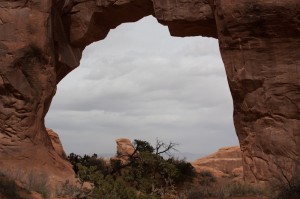 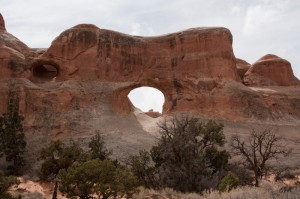 We decided to risk one other area of the park to visit Double Arch, which, as the name implies, is where to arches were formed from the same part of rock, but span in two different directions.  Yay erosion!  I have a feeling the wind had something to do with this as well.  After taking about a gazillion more photos, we retreated back to the car.  It took very little work to “convince”  Tom that we needed to spend the night in a hotel that night rather than camping in the 40+ mph winds again.  And there was a shower. Whee!  The Super 8 cost 55.00 with our AAA membership, which meant we got a room and a tub.  No closet or, strangely, trash can, but hey, I wasn’t complaining.  There was no wind. 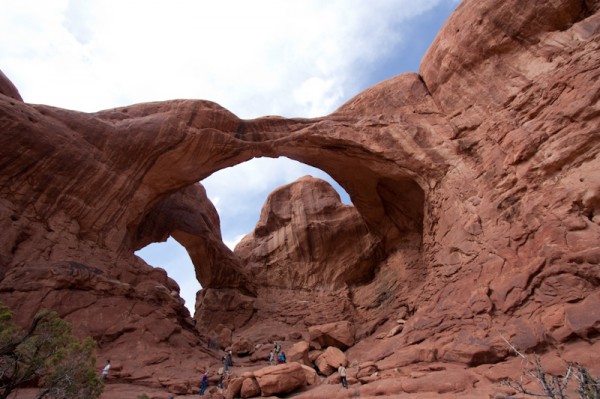 The next morning, before we headed over to Canyonlands, we went back into the park to check out Delicate Arch.  This is THE arch.  Like, the one Utah deemed worthy of putting on it’s license plate.  In the morning light with some spectacular clouds, the scene was striking indeed.  It was quite cold, and guess what, windy!  The arch was exquisite though, and quite fun to photograph.   Arches was a wonderful way to start out our trip to this very unique part of the country. 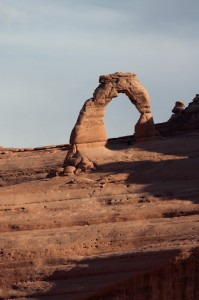 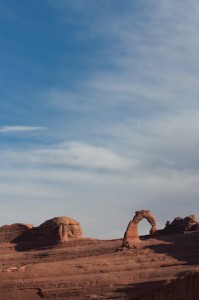 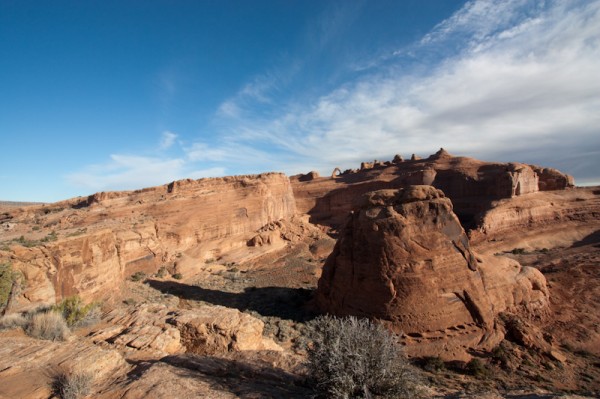 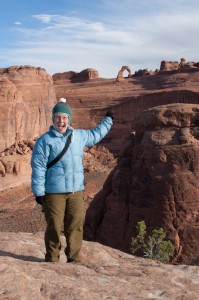 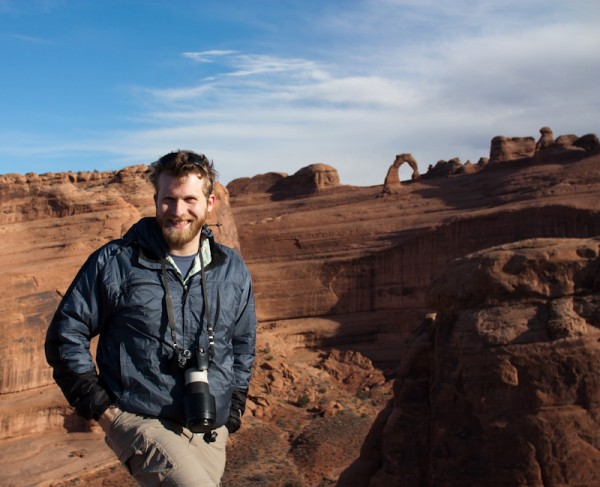