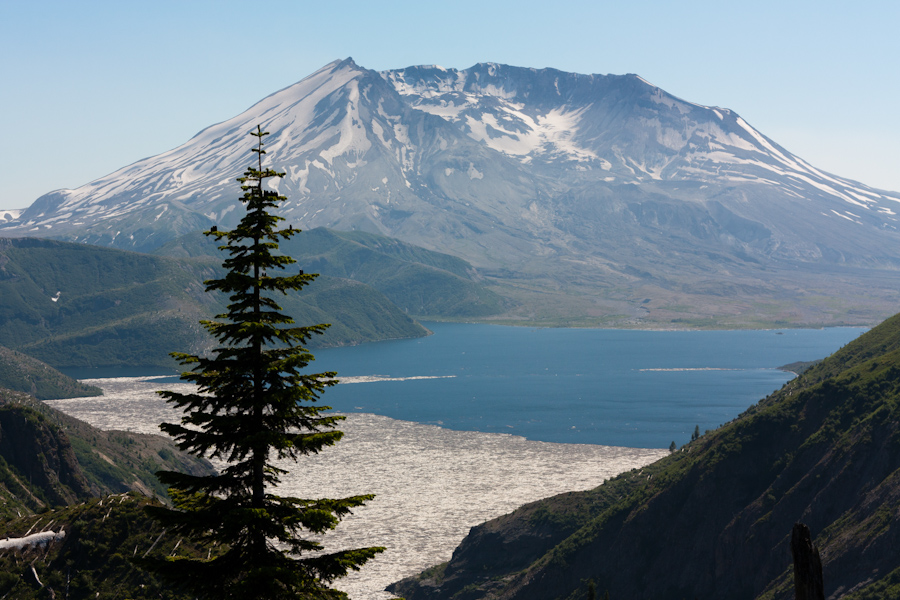 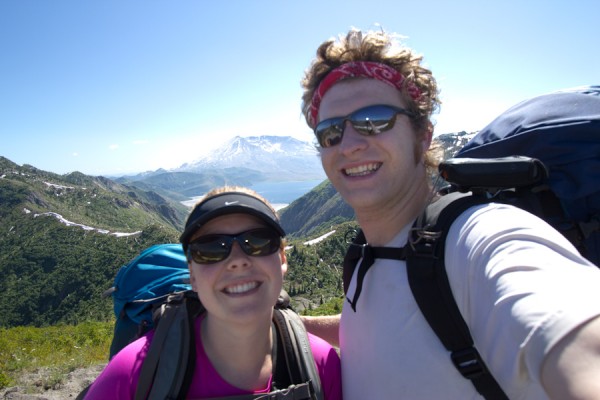 So after all the traveling we’ve been doing this year, it has been very nice to be home, here in Washington, for a few weeks in a row.  Summer has been a bit stressful, which is evidenced by the lack of blogging, but things have calmed down a bit.  We’ve also had a very slow start to our summer this year.  We’ve dubbed it “The Spring That Wouldn’t End”.  As all of my East Coast friends have been melting into puddles in the extreme heat, we’ve been rocking jeans and hoodies ’till about last week.  ::sigh::

However, the sun has FINALLY decided to show up, and Tom and I fled to the mountains, as we often do.  Due to the aforementioned late spring, we also have a heavier snow pack than usual, and one that’s been hanging around for a while.  Now, growing up in Virginia, I never had to worry about things like “snow pack” effecting what I wanted to do on a summer weekend.  It’s summer, therefore there shouldn’t be snow, RIGHT?  Not so out here.  Summer arrives, and hikers patiently (or not) wait for their favorite hikes to melt out so we can get going again!  This year, that patience is wearing thing, as it is August, and many of the hikes we normally do in June still havn’t melted out.  So, we’ve been forced to look for other options.  We’ve done some pretty hikes in eastern Washington, on the other side of the Cascade range, which if you didn’t know, is basically a desert.  Last weekend, we opted to stay on the west side of the Cascades, however, and head down to the Mount St. Helens area to do some hiking or backpacking. 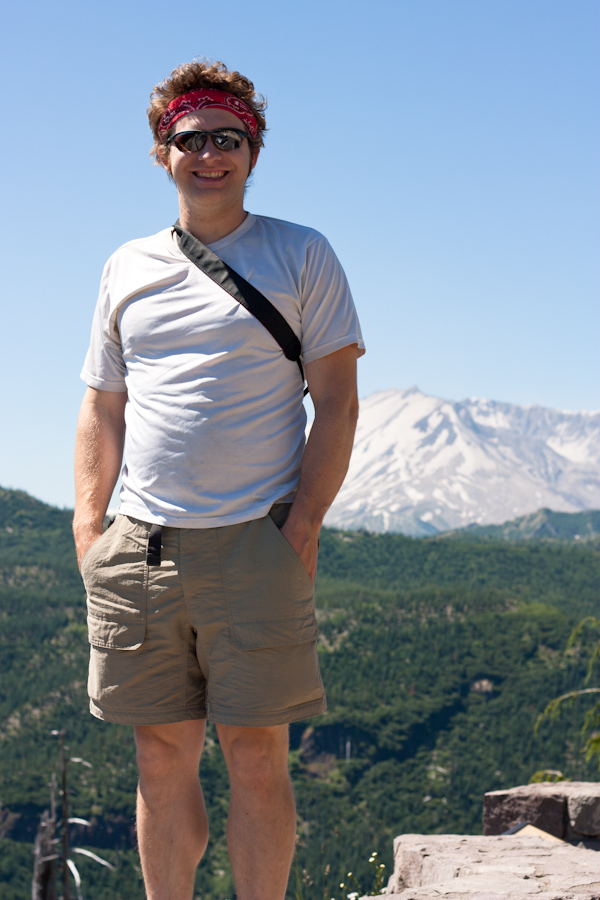 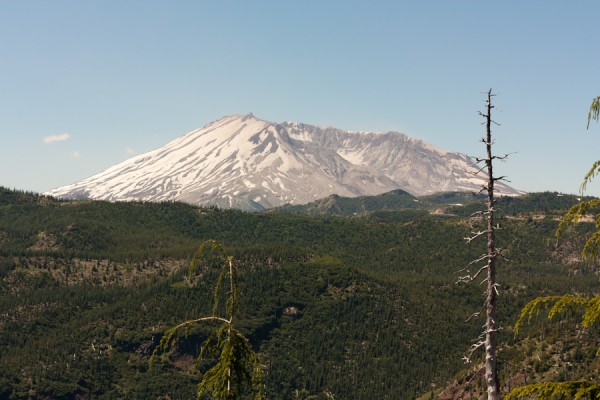 There is limited and very confusing information about backpacking in the Mount St. Helens area.  It is registered as a National Volcanic Monument, which would make one thing that it is run by the National Park Service.  Not so.  It’s run by the National Forest Service, which generally has much more limited information about backcountry conditions, permits, etc.  You really have to talk to a human to figure it all out, except it’s really hard to get a human on the phone.  Ok.  So we decided to go anyway, and check in at the Forest Service Ranger Station on the way.  They were very helpful, but very busy, with people asking for everything from good motorcycle routes to mushrooming permits (yes, apparently this is a thing).  We secured our backcountry permit, which allowed us to camp in the Mount Margret Backcountry around Mount St. Helens.  We were assured that the route we planned would be snow free and all would be well.  Yay! 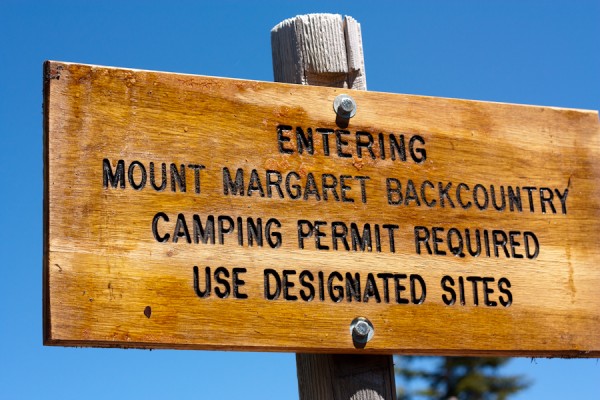 We headed in towards Mt. St. Helens, and were soon greated by spectacular views.  The day was amazingly clear, and we had unobstructed views right into the crater.  I had never been so close to the volcano before, and it was pretty impressive to see the destruction it caused when it erupted.  The land in the blast zone near the volcano has been almost completely preserved so that researches can study the regeneration of the forest around an active volcano.  There are still stands of trees that were blasted flat by the eruption, laying where they fell over 30 years ago.  Spirit Lake, which lies right in the blast zone, is still filled with logs that were blasted into it all those years ago.  It’s quite a site to see. 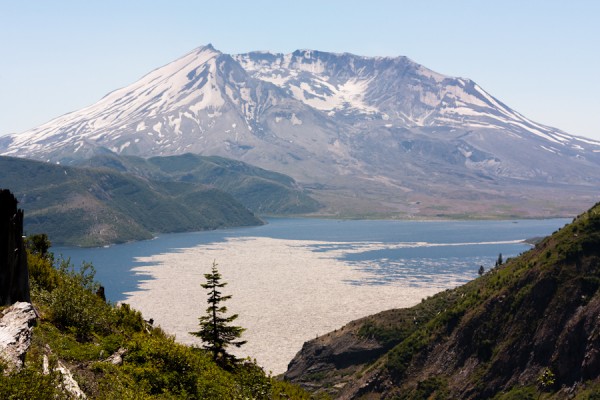 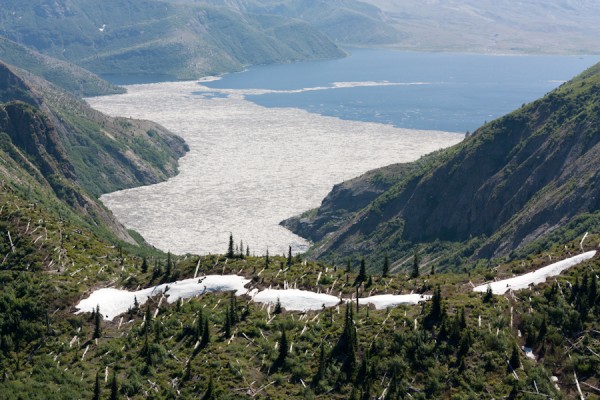 Our planned route was up Norway Pass to Panhandle and Obscurity Lake and to camp at the lakes for the night.  We packed up our backpacks and headed out.  The trail is steep and exposed to the direct sun for most of the way up to Norway Pass.  As the day was clear, we had amazing views of the nearby Cascade volcanoes:  Mt. Rainier, Mt. Adams and even Mt. Hood off in Oregon.  It was quite a treat for folks who have been living in a cloud more than normal this year.  As we got up to Norway Pass and dropped down slightly , Mt. St. Helens came into view.  Woah.  We had views right into the crater.  There was definitely a moment where I thought about what would happen if the volcano decided to randomly erupt just then, but then rational thought regained purchase, and we moved on. 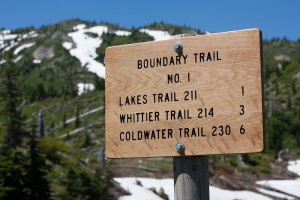 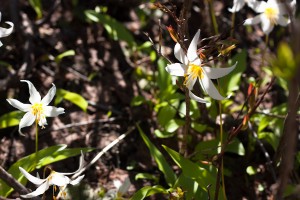 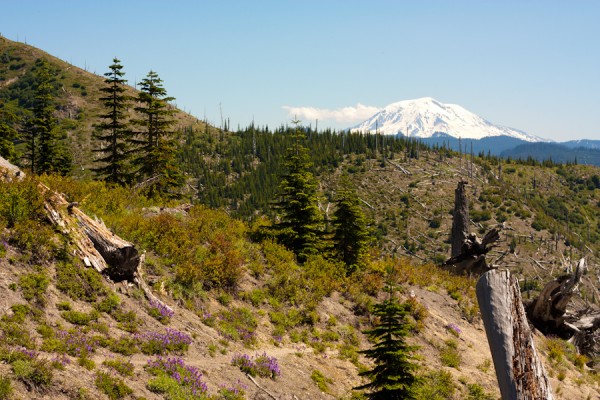 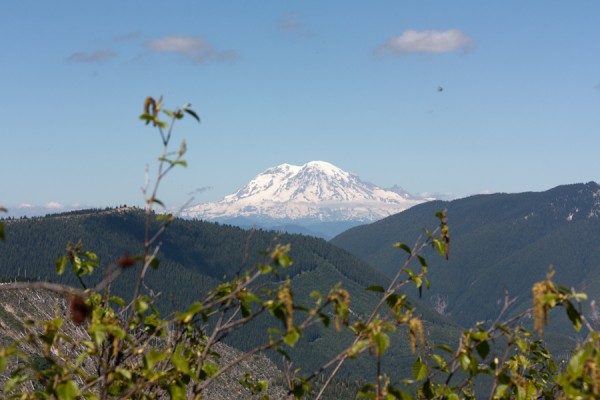 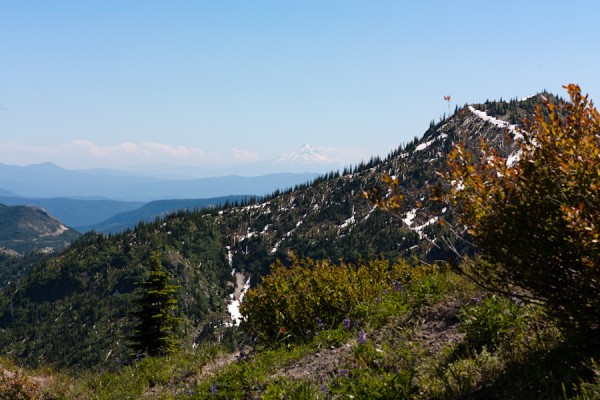 We continued to climb and soak up the sun and views until we go to Bear Pass, where the trail dropped over the north side of the ridge…right into a very steep snowfield.  We had not brought snow gear, so we needed to reassess.  Tom bushwacked down a bit past the snowfield where we could see the trail came out again to see if was passable further along.  He came back, reporting that there were two more steep snowfields that were probably not safe to cross.  We were slightly frustrated that we hauled up all of our backpacking gear to not be able to camp, but realized that sometimes you just have to turn around.  We spent some more time hanging out on the ridge, looking at the mountains and the wild flowers before we headed back down. 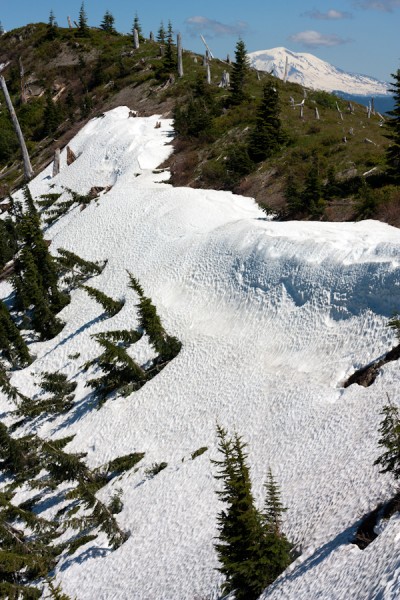 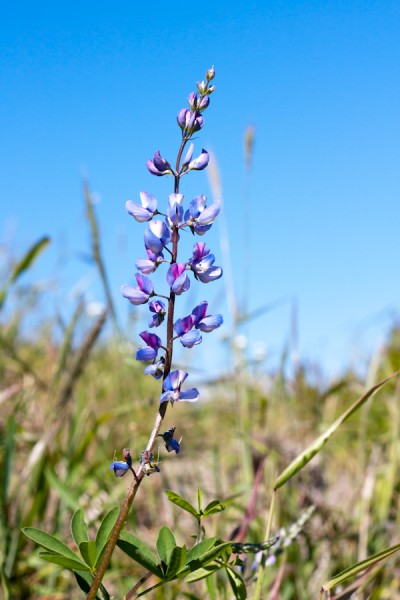 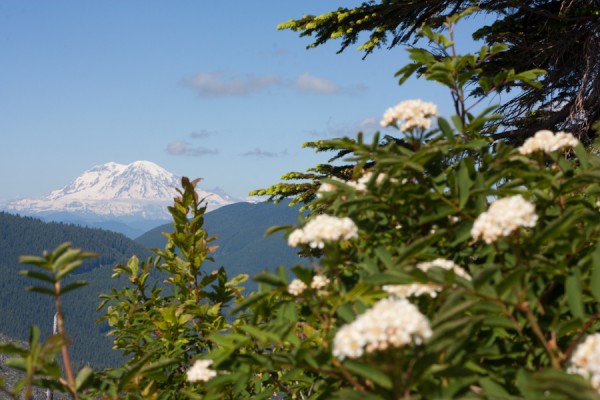 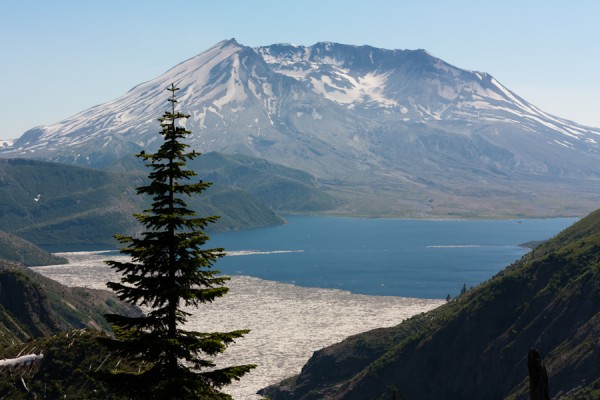 That night we camped at the Iron Creek NFS campground, which was huge, but nice.  I was feeling a bit pouty about being hot and dirty and not being able to backpack to a nice cool lake and just wanted to go home.  Tom convinced me that staying in the nice campground was preferable to a 3+ hour drive home at 7:30 at night, and he was right.  The next morning, we decided to hike up Goat Mountain, which is a short day hike near the volcano and our campground.  The trail is quite steep, gaining 1,600 feet in about 2 miles, but the forest is nice and cool.  Once we got to the ridge, we realized that the low lying clouds were pretty much obscuring all the views of the local mountains, but there were nice wildflowers to look at and the ridge was pleasant.  After the bugs found us though, it was all over.  After a quick stop at a lingering snowfield to cool down, we were off.  We headed down off the ridge and back to our car. 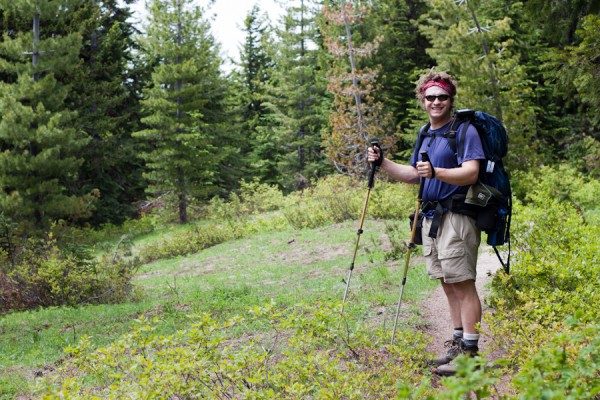 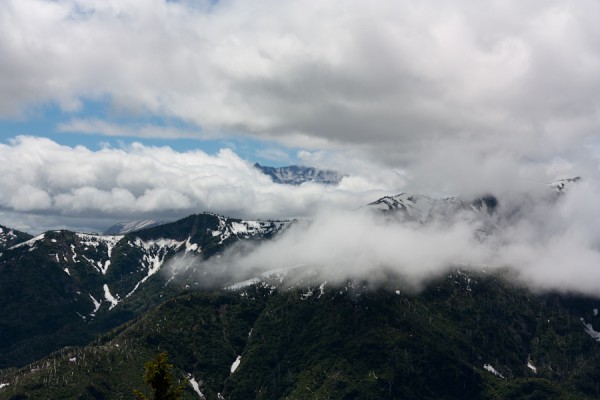 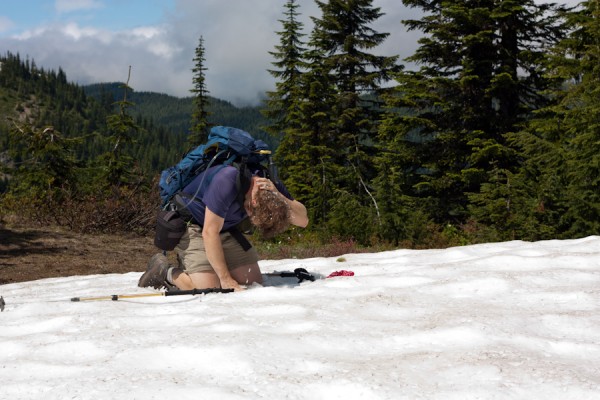 It was a great weekend, and I had a great time exploring a different part of the state.  We will be back! 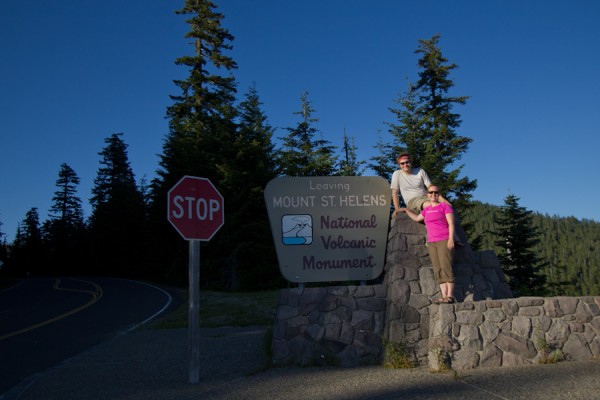