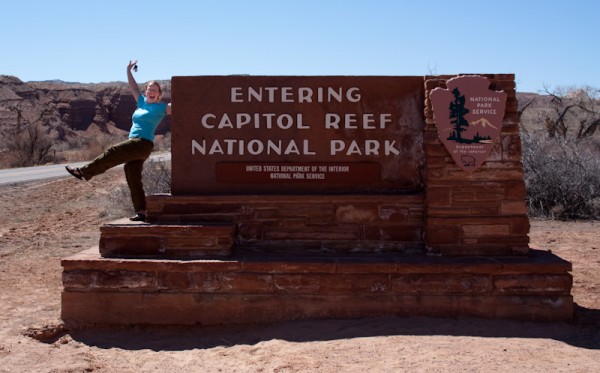 The last park that we visited on our trip to Utah was Capitol Reef National Park.  Neither Tom or I had heard of it before, so we did a bit of research before hand, and made sure to talk to the rangers when we arrived.  We stayed in the park for two nights, and really were able to get a feel for the place.  The park is known for to very different things. The first is that it is geogologically interesting.   The “reef” has nothing to do with oceans or fish, but is actually what is known as the “Waterpocket Fold”, which used to be part of the Colorado plateau. Some very difficult to understand things happened to do with faults and erosion, caused the Waterpocket Fold to be exposed after millions of years, and the result is a beautiful monocline which seems to jut out of the earth.  The entirety of the Waterpocket Fold has been protected in Capitol Reef National Park.  The creation of the fold is described in way more accurate detail on the Capitol Reef National Park website. 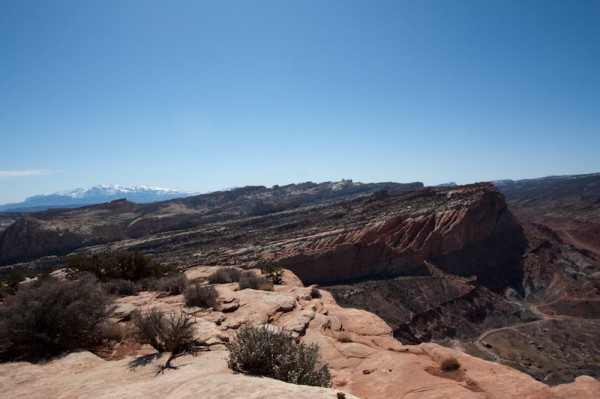 The park also exists to preserve the historical heritage of the area.  It was the original home of the Fremont Indians, who left petroglyphs in the sandstone cliffs.  Later it was settled by Morman pioneers, who created the town of Fruita.  They planted fruit orchards, thus giving the town it’s name.  The Fremont River flows through the valley that lies below the upthrust of rock, and this river is what allowed the settlers to survive in the otherwise arid surrounding dessert.  More details about the settlement of Fruita can be found here.    One of the homes of the settlers has been preserved as a museum dedicated to showing what pioneer life would have been like for the first settlers of Fruita.  Happily, the Gifford House museum also sells homemade pie and locally produced salsas and jams.  Yum! 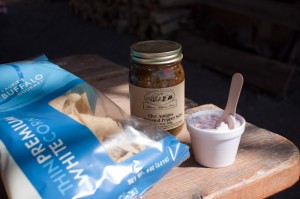 We arrived in the park in the afternoon our first day, and spent some time setting up camp, and eating our first of several pies of the visit.  We checked out some of the historic buildings which have been preserved by the park service, including the one room school house.  As a teacher, I could not imagine having to teach 20 students of all ages in one room, and have all the respect and admiration in the word for those women who did.  ::shudder:: 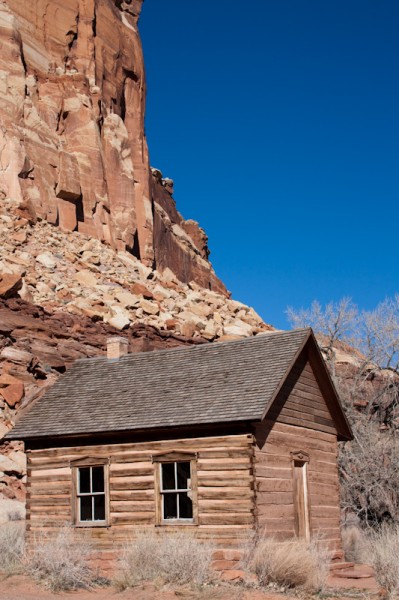 That evening, we watched the sunset paint the dessert red and orange.  I had lots of fun photographing this tree.  It was so photogenic! 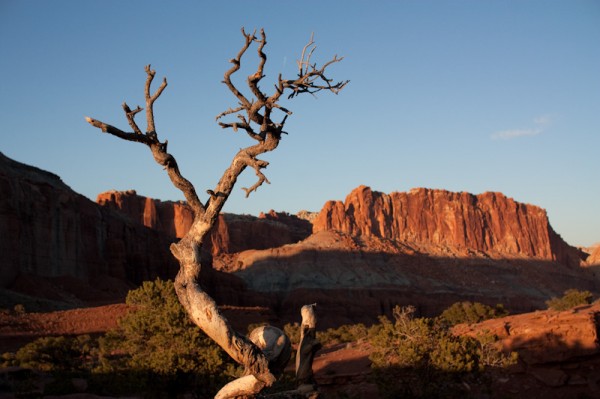 On our second day in the park, we hiked the Rim Overlook Trail, which wound its way up to the top of the monocline feature.  We started early in the morning and had cool temperatures and beautiful light.   We passed through several different layers of rock as we climbed, even encountering large, black, pitted boulders which were deposited by an ancient volcanic eruption! 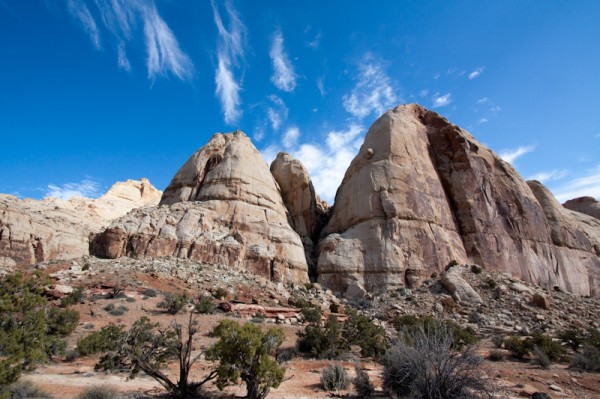 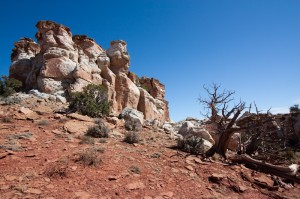 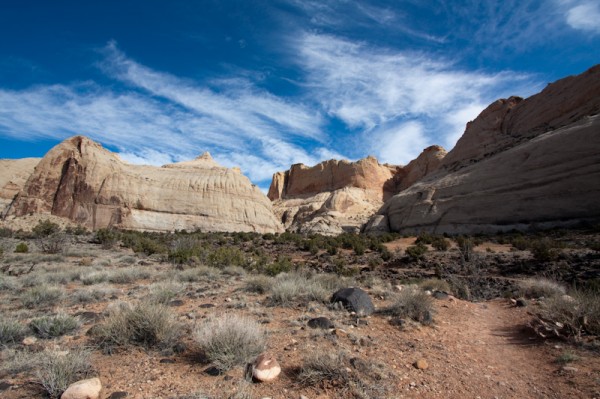 As the day progressed though, it got much hotter and the trail wants for shade.  It is almost completely exposed the entire way.  When we reached the top, we were rewarded with expansive views of the entire valley, the mountains beyond and the historic town of Fruita, with its orchards, a few thousand feet below.It probably didn’t get hotter than around 80 degrees F that day, but that’s quite warm for us Seattlelites who haven’t seen 80 degrees since last August!  We were hiding under every overhanging rock and scrubby tree we could find when we stopped for water on our way down. 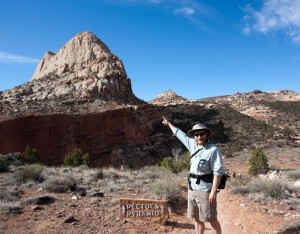 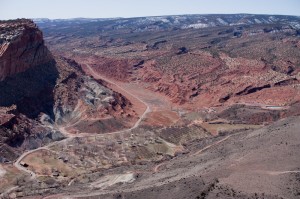 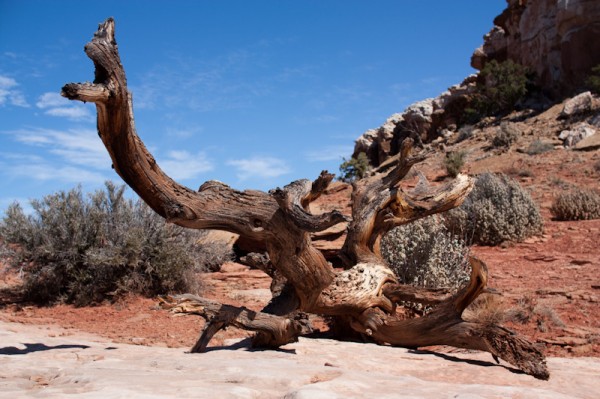 Captiol Reef is a beautiful and interesting park, and I am suprised that it is not better known.  I would recommend it to anyone making a trip through Utah’s parks to check it out, it is definitely worth the trip! 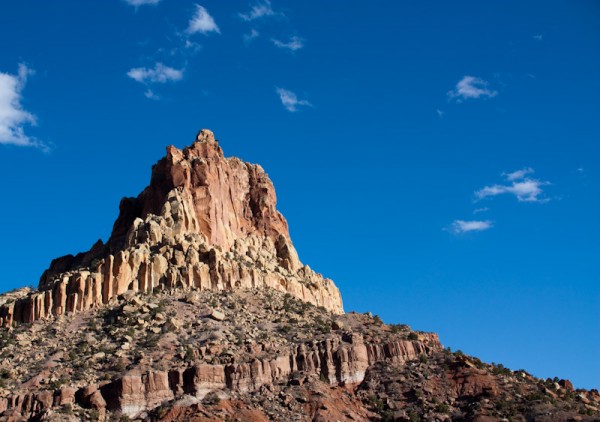